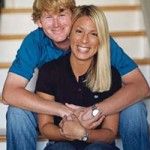 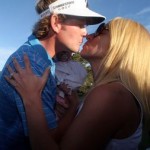 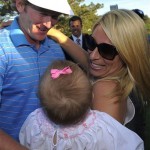 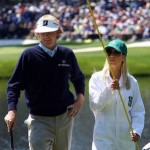 Before we even talk about Brandt Snedeker’s wife Mandy, I need to make a statement. We’ve admittedly done a lot of golf posts the last few months. Why? Well mainly because the wives and girlfriends are all ridiculously hot and we’d be stupid not post them. I’m sorry for the non golf fans who have seen a wave of posts lately, but this has been a public service. This is about the third girl I’ve seen in the Master caddie outfit and every one of them looks like a smokeshow. Is there a way I can order one of these for my girlfriend?

Brandt Snedeker isn’t the biggest name on the PGA tour, but in 24 hours he very well may be. After two rounds Brandt is leading The Open, or the British Open as we back in the states refer to it. For Brandt it all started back in Nashville, Tennessee, honing his skill on the municipal courses in and around the city with his brother Haymes Snedeker (winner of The Big Break: Michigan). Brandt attend Vanderbilt for golf before turning pro. Nashville also happens to be the location where Brandt met his future wife, Mandy Toth.

Brandt Snedeker married Mandy Toth, who originally hails from Cleveland, in 2008, the year after Brandt won the PGA Rookie of the Year award. After a great start to his PGA career Brandt, while making plenty of money on the tour, has never had that big break through win to vault him into the top of the golf rankings. Ironically, in a few hours, it might be the British Open that puts him on the national landscape; a tournament in which Brandt has never has made the cut prior to this year. True to his roots Brandt and Mandy still live in Nashville with their daughter Lily who was born in 2011. 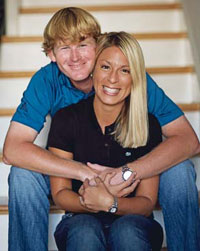