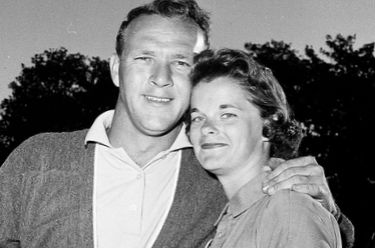 Arnold Palmer’s wife Kathleen (Kit) Gawthrop, his second wife, married him by on the beach in Oahu, Hawaii in 2005. The wedding was quite small. Literally just the bride, the groom and the minister. Palmer married Kit Gawthrop six years after his first wife, Winnie Palmer, died. Palmer’s friends really appreciated the huge boost that Kit provided to Palmer. The sudden loss of his first wife devastated Arnold. Said Hollis Cavner, director of the Champions Tour’s 3M Championship,

What he’d went through with Winnie, and to find Kit, the love he’s got with her now, it really helped him tremendously… She was absolutely the perfect thing for Arnold to get him back to being the Arnold we know and love.

Even Palmer’s children with Winnie found Kit to be a pleasure. However, they never felt like Kit was living in Winnie’s shadow. But, having the love and support of your family and friends has to make it easier. It was nice to see Palmer find love in his life once again.

Arnold Palmer’s wife Winnie Palmer met her future husband in 1954 at the Waite Memorial. An amateur tournament on Labor Day weekend in Pennsylvania proved the perfect place for true love to take place. As if having won the U.S. Amateur tournament earlier in the year wasn’t enough, Arnold ended up making an even bigger life accomplishment in meeting Winnie. Winnie was just 19, studying interior design at Pembroke College. After having dinner the next evening, Palmer went on to win the tournament. And in an even bigger coup, Winnie accepted his proposal for marriage.

While the couple had initially planned for a spring wedding, their plans soon changed. Since Winnie wasn’t old enough to wed without her parent’s permission, they had to get creative. Winnie’s sister made some arrangements, and the couple wed five days before Christmas in 1954. By Christmas the following year, Winnie was pregnant with the couple’s first child, Peggy. Amy, the couple’s second daughter, followed two years later. 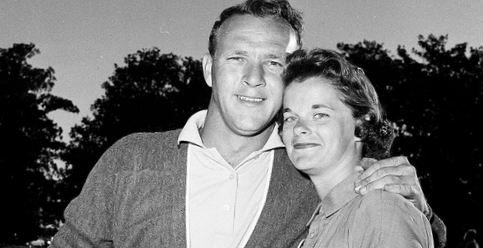