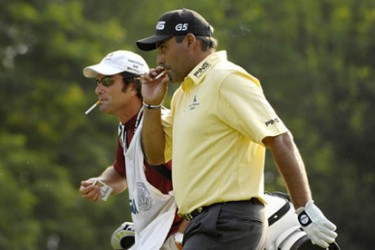 Angel Cabrera (otherwise known as “El Pato,” which translates to “The Duck,” in Spanish) is 18 holes and breaking one tie away from grabbing his second Green Jacket at the 2013 Major’s in Augusta.  Waiting at the 18th green to either celebrate or console The Duck will likely be Angel Cabrera’s wife Sylvia Cabrera.

Angel Cabrera is a man that golf fans should root for universally.  The stocky, waddling every man, who used to have a penchant for lighting up a butt on every hole has come from humble beginnings to snag himself a pocketful of change from his golfing prowess.  Despite navigating a successful PGA career, Cabrera recognizes all that golf has provided him:

“I wasn’t able to finish primary school. I became a caddie when I was 10 to put some food on the table, so that’s why probably these moments are enjoyed even more than the common things. I definitely had to play golf to make a living, to feed my two kids and wife. I had no other option.”

Interestingly enough, it’s not entirely clear if Angel and Sylvia Cabrera were ever formally married.  In an article from Golf Digest in 2010, it referred to Angel Cabrera’s common law wife, Sylvia Cabrera.  Sylvia (or Silvia as we’ve seen published), lived near Angel when he was a teenager, and is reportedly 12 years older.   Regardless of their formal, legal status, Angel and Sylvia Cabrera have two sons together, Angel Jr and Federico.  Angel Jr became a professional goldfer in 2012, but joined the Canadian Tour.  Federico entered the PGA’s qualifying school in 2008 but was eliminated before stage two.