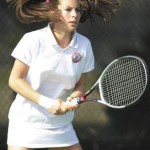 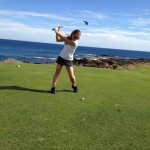 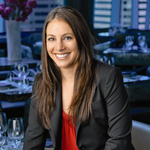 The newly retired LA Galaxy star took to Facebook to reveal the news, saying: “Lastly, and most importantly, I recently got engaged to the love of my life, Hannah. I have never been this happy and I’m excited for our future together!”

Landon Donovan’s girlfriend Hannah Bartell is a hospitable friend indeed. The lovely hotel sales executive was recently spotted by TMZ in Los Angeles enjoying a night on the town with her outcast soccer beau. That’s right, Donovan’s a soccer outcast. I call’em how I see’em, friends.

I was reading through an interview with Hannah by the BU School of Hospitality Administration, given for PR purposes. This kind of thing will put anyone to sleep. She talks about having a career in the hotel industry, going to BU in order to learn the hotel industry, going to hotels in the hotel industry, being industrious in studying about the hotel industry, looking at pictures of hotels while staying in hotels. Fascinating, Hannah, truly! Here’s her attempt at an inspiring quote: “Push yourself to have as many experiences as you can, both personally and professionally, that change you as a person and as a leader.” Boooooo! Get off the stage, boring guest speaker. Seriously, guys, would you rather me expound on her hotel business experience, or enlighten you about her college tennis days? Yep, she used to play competitive tennis at BU, and she’s got her hair in pigtails in one of the only pictures of her playing on the net.

Landon Donovan took her out to some steak house in LA a few nights ago. Schlubbin’ around town with hotel executives now that he’s got nothing but free time. The two have apparently been together for about a year. TMZ mentioned that she looks a lot like Landon’s ex-wife, Bianca Kajlich. That would be a very accurate statement. I’ve never seen a report that mentioned that so-and-so looks a lot like so-and-so, compared the two, and then said to myself, “no way; they don’t look alike at all.” To conclude, Landon’s attempting to travel back in time and relive the days when he was dating Bianca (via Hannah) so that he can convince himself he’s still young enough to play on the US World Cup team. 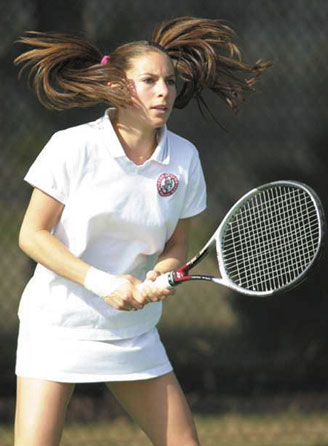