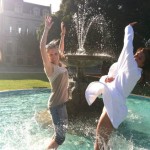 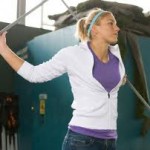 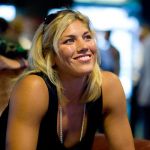 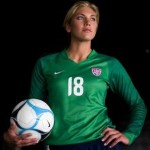 UPDATE: 10/08/2011: Appears Hope Solo is dating Adrian once again, or maybe never stopped. Hope Solo attended the Just Dance 3 release party with Adrian, not her Dancing With The Stars partner Maksim as she was rumored to have been dating. Looks like Adrian may be here to stay, as the two have dated on and off for 11 years, and he’s still around after her ascension to superstardom.
Anything changes, we’ll keep you posted.

———————–
08-30-2011: Hope Solo will be the latest athlete to compete on Dancing with the Stars. Solo will appear in the 13th season of the show and, if the last year’s athlete winner Hines Ward is any indication, she will likely do pretty well. We here at PlayerWives.com are looking forward to seeing Hope Solo shaking it on the dance floor.
*********
08-11-2011: Though not quite the Playboy spread that most of male America was hoping for, it looks like Hope Solo nude pictures have become a reality. According to Hope Solo’s twitter feed yesterday, she is likely posing for the annual “Body” issue of ESPN the Magazine. Hope Solo tweeted, “Being naked outside is very liberating….at least I hope it will be @ESPN and @ESPNMAG!!! GAMETIME BABY! Ball up!”. No word on how possible boyfriend Adrian Galaviz feels about this, but we do have a semi-nude photo of Hope Solo to show for our efforts. Check it out to the right.
*********
07-15-2011: According to Twitter user TyHarris24, who claims to be Adrian Galaviz’s cousin, Adrian is still Hope Solo’s boyfriend. According to TyHarris24 “Well hes my cuz, she was at his fathers funeral recently, they r very much together, hes in germany with her now”. Thanks to our friends at BleacherReport.com for the tip.

We’re not exactly sure how long Hope Solo was dating Adrian Galaviz. The two were dating in 2007, but by 2010, Hope was more than happy to announce that she was single. Adrian is a Seattle area party promoter, who is also apparently one hell of a USA soccer fan.
But really, why pretend we care about him. We’re here to put up pictures of Hope Solo. When you rate her, remember you’re rating Hope, not Adrian. And it’s your choice whether you rate her as Hope Solo blonde hair or Hope Solo black hair. We can’t decide either.
Tip of the hat to Walsh here. 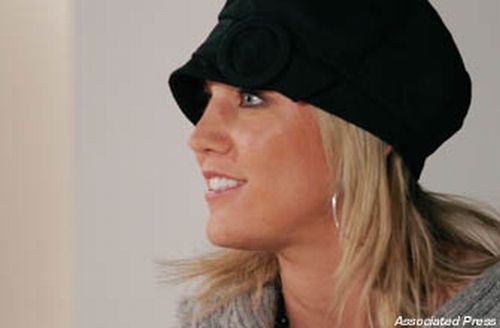