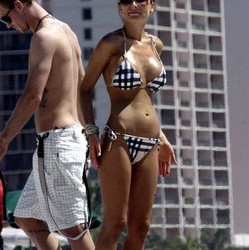 For those new to the site, we have a running rating rank on the sidebar, and I’m not going out on a limb when I say Christian Wilhelmsson’s wife Oksana Andersson has a very good chance of showing up on this list pretty quickly.

Now, I know a lot of readers are probably saying “typical Swedish girl” but I will have you know that Oksana was actually born in the Soviet Union. It wasn’t until the age of 10 that Oksana moved to Sweden, so techically she isn’t your ‘typical Swedish girl.’ Oksana is the wife of Swedish winger Christian Wihelmsson (Al Ahli SC). Oksana is somewhat of a pop culture star in Sweden having danced in the musical group Sunblock. For those of you not to familiar with Sunblock maybe you caught their remix of the Baywatch theme song “I’m Always Here.” Laugh all you want but the song reached #4 on the UK charts. Oksana is also known for her short stint on the reality show Paradise Hotel which is exactly the type of show you think it is going off of the name.

Christian and Oksana were married in 2010 in Las Vegas. Together, they have one child, a daughter named Naomi born in 2011. 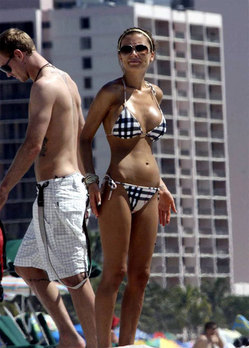