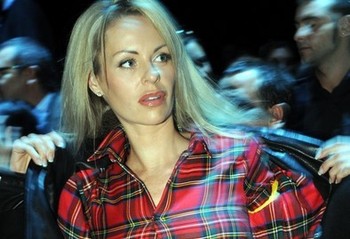 Victor Valdes has drawn the attention of female fans in Barcelona for years now. Their excitement is often piqued when they find out that Valdes is not technically married, only to have their glee plummet back to earth once they find out he’s in a committed long term relationship with a woman no man would be willing to stray from.

Victor Valdes and Yolanda Cardona had their relationship explode onto the scene when they did an extremely risky NSFW photo shoot with the Spanish magazine DTLux in 2011. The article and photo shoot caught a lot of people off guard because Victor has always been considered an extremely private person. In fact, outside of the photo shoot, there isn’t a lot on the relationship between Victor and Yolanda.

It simply looks like we have a case of a player who doesn’t want his personal life in the limelight. Victor would much rather continue his assault on all Barcelona goalkeeper records. Yolanda is a Columbian born model but I don’t think we would call her a big time supermodel. The couple is not officially been married but from all accounts they have been together for a long time. In 2009 Yolanda gave birth to son Dylan.