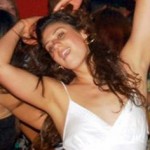 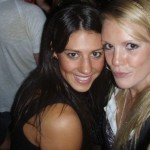 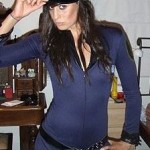 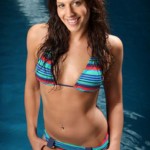 In order to defeat your opponent, you must first learn about them. So while we are decidedly pro-America, we figure you also want a glimpse at the competition. Never say we aren’t looking out for you. On that note, we present to you Australian swimmer Stephanie Rice.

For those readers not familiar with their Australian swimmers let me get you caught up. Rice is another in a long line of talented Australian swimmers competing in the Olympics. Stephanie’s first Olympics were 2008 in Beijing where she won three gold medals in the 200m and 400m Individual Medley and the 200m FreeStyle Relay. In all three events Stephanie set or helped set world records. With three gold medals in tow Stephanie became the new “it” girl for Australia and boy did she not disappoint

Before we tackle her past boyfriends let’s go over some of the media controversies she was able to get herself into. In 2008 Stephanie posted some racy photos on Facebook of herself and friends. For most people the photos would have been seen as the highlights of a fun night out for a girl the media ran the photos and, due to the controversy, all swimmers for Australia were asked to make their profiles private. 2010 was a particularly rough year for her, when she lost a sponsorship with Jaguar due to an offensive homophobic tweet following an Australian rugby victory (we’ll let you look it up). Jaguar not only pulled out of their deal with Stephanie but took back her new car they gave her as part of the deal. To top it all off, later that year, she underwent shoulder surgery.

Fast forward to 2012, and after receiving a swimsuit from designer Ellie Gonsalves Stephanie did the most natural thing anyone would do; she put it on and posted a pic at her twitter site @ItsStephRice. This of course lead to more controversy. Now you are probably asking the same question I am. Why is a picture of a swimmer, who is routinely in a bathing suit, a big deal? For one the bathing suit was a little suggestive, although not over the top. The other issue was people thought Stephanie still had a deal with Speedo. This turned out to be false as her deal with Speedo was over at the time of the picture.

Now, as for boyfriends, Rice admittedly has the reputation of a party girl having been linked to such famous athletes as Michael Phelps and Brendan Capell. Rice however, pled otherwise to the Sunday Telegraph – “I have had two serious boyfriends but apparently I have been with every sportsperson alive”. Speaking of those two boyfriends…

In 2008, she dated fellow swimmer and 2008 Olympic medalist Eamon Sullivan, but the two split just prior to the Beijing games. After the couple split up she moved on to Quade Cooper who is an Australian rugby player and the likely reason Stephanie was so heavily involved in the rugby match that led to her homophobic celebratory tweet. Rice and Cooper broke things off in January after they began dating in mid 2010. We’re guessing the relationship didn’t exactly help with Rice’s party girl image as Cooper is known as quite the partier himself (for example, he was banned from a bar just a few days after the break up).

With Cooper behind her, the now single Stephanie is preparing for the 2012 Olympics and not focusing on finding a boyfriend. However, despite her lack of serious boyfriends in the previous Olympic hiatus, speculation never stops. In fact, a local Australian online SportsBook betting agency is now taking bets on who her next boyfriend will be. And when that news comes out,… we’ll have it here. 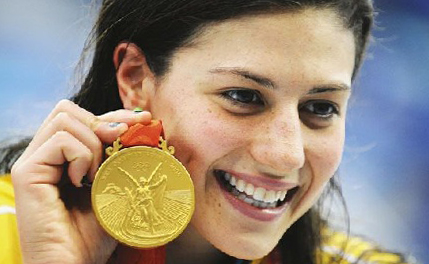