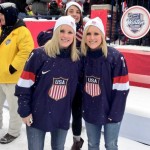 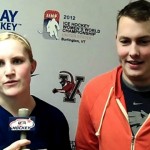 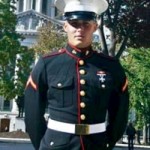 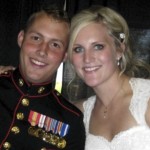 After missing her compete in the Vancouver Olympics, Monique Lamoureux’s husband Taylor Kolls is making certain he doesn’t miss his wife in Sochi. In 2010, their worlds were quite different. While Monique Lamoureux was competing in her first Olympics alongside twin sister Jocelyne, Taylor Kolls was facing the very real danger of firefights and IEDs in Afghanistan.

The couple was only in high school when their relationship started. Taylor Knoll’s younger sister, a hockey teammate of Lamoureux’s, introduced them. It seems the couple got close fast, and Taylor Kolls knew quickly he wanted to marry Monique Lamoureux. But, Taylor Kolls dreamed of becoming be a Marine, and Monique Lamoureux wanted to pursue college hockey and make the national team. So, the couple decided to peruse their dreams while maintaining a long-distance relationship.

Due to his deployment, Taylor Kolls had no idea what was going on in Vancouver. He has since watched videos of his wife’s games on the Internet. But, he still regrets not being able to share the excitement of the day when Team USA won the silver medal.

Having her husband around is special for Lamoureux. The longest they had been together since he enlisted is five weeks. But Monique Lemoureux doesn’t have to worry about her husband being deployed to Afghanistan anymore. Instead, as he told ESPN.go.com, Taylor Kolls will be by the ice hockey forward’s side for support in Sochi:

She’s been supporting me for so long while I have been gone, now it’s my turn to be there for her. This is a whole new thing for both of us. It’s something we’ve been waiting for a while. 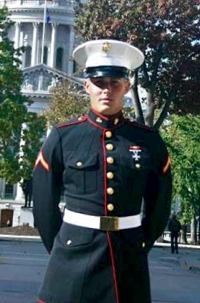