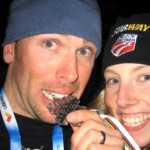 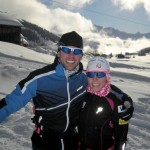 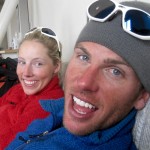 Known for her pink hair and outfits, Kirrkan Randall, is competing in her fourth Olympics in an attempt to become the first American woman to win a cross country medal at the Games. Kirrkan Randall’s husband Jeff Ellis is a huge supporter of her work, being a former Canadian ski racer himself.

The couple met at a ski competition in 2006, and Jeff Ellis soon learned that if he didn’t want to spend a lot of time away from his superstar wife, he was going to have to land a job where he and the “Kikkanimal” could be together. In 2012, Jeff Ellis landed a job as the International Ski Federation’s (FIS) Cross-Country Marketing Support and assumed responsibility of the federation’s website, Facebook and Twitter accounts. This opportunity allowed the couple to see each throughout the World Cup.

Ellis was quoted on fasterskiier.com as saying,

The 5 months apart last winter was a long stretch and for the foreseeable future while Kikkan is racing that would become the norm. With this job I will see her all winter, and at the same time for my own future be able to add to my resume great work experience.

The couple, whom friends have been known to call, Randellis in a nod to their closeness, even had the opportunity to share an interview together after Kikkan Randall placed a career-best second in the Kuusamo 5 k freestyle. With such solid support from her husband, let’s hope the 17-time national title holder in cross-country skiing and two-time world sprint champion can bring home the gold for the US this year.