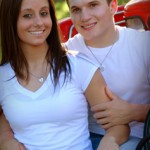 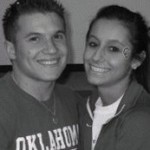 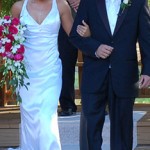 I will say one thing about Jonathan, the kid has some marbles.

Most athletes who just qualified for their first Olympics in gymnastics would bededicated to their trade 24/7. For all you know this could be your one chance at Olympic gold. Jonathan however had something else on his mind, mainly popping the question to his long time girlfriend, Haley DeProspero. Between the U.S. Championship and the 2008 Olympics Jonathan proposed to his girlfriend Haley DeProspero. Jonathan went on to win silver on the high bar in 2008, but has recently qualified for the 2012 Olympics. Like many of the athletes we will post on during the Olympics, Jonathan and Haley are both in the same field. Jonathan and Haley met at the University of Oklahoma where they both attended school.

At first, Haley wasn’t all that impressed with Jonathan. In an interview with News OK, Jonathan and Haley admit:

“She actually didn’t like me at all at first,” Jonathan admits,
“But, I gave him my number against my first intuition.” replied DeProspero

The rest was history.

After the 2008 Olympics Jonathan was able to finish up the planning for the wedding and the couple married in 2009 at Haley’s family home. Haley is currently studying for a medical degree.