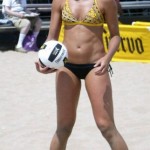 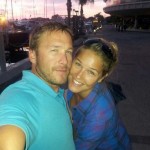 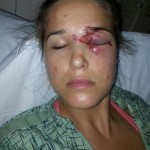 UPDATE: 03/07/2013: 2013 has proven to be a difficult year for Morgan Beck. Not only did she lose her baby with Bode, but the other woman (Sara McKenna) who Bode knocked up was days away from giving birth. McKenna gave birth in February to Samuel Bode Miller Jr. and this has set Morgan into a rage. McKenna is accusing Beck of harassing her via fake twitter accounts and the police have now become involved. Somehow I don’t think we’ve heard the last of this story.


01/21/2013: It now that the woman who is pregnant is not his wife but Bode Miller’s girlfriend Sara McKenna. The two had a fling during the spring of 2012, right before Bode met his future wife Morgan. If the timing is correct it would seem that Bode wasn’t cheating on Morgan but more just continuing to be the player he is.

01/20/2013: As we previously talked about, Bode Miller’s wife Morgan Beck is an open book on Twitter, and took to the Twitter-sphere to announce some deeply personal news. Beck announced on Twitter that she suffered a miscarriage with their child due in August.

“Pretty hard morning. We lost the baby : (Broken hearted but getting through it together.”

Especially hard news for any parents to learn, but multiplied as Bode Miller is headed into two separate paternity suits. Thoughts are with Bode Miller and Morgan Beck at this time.

01/19/2013: Looks like Bode Miller has been a busy man. In our first post we introduced you to Bode’s wife Morgan Beck who he tried to kill with a golf ball to the face. We joked at the end of the post that Bode would need to put a few extra gifts under the tree to make up for hitting his wife with a golf ball. Bode gave her an extra gift alright, he knocked her up.

TMZ broke the story that Morgan recently announced she is pregnant and due in August. However, it wouldn’t be a Bode Miller story unless there was more to it. Apparently, Bode also is claiming he is the father of a 4-year-old girl. Not satisfied enough with that,… Bode is claiming he is the father of a baby that has yet to be born. Read that again, BODE is the one claiming he is the father, not the other way around. Doesn’t this mean Bode was cheating on his wife? Am I missing something on this one? I checked out Morgan’s twitter account since she is very open in expressing her feelings on twitter and I don’t see any sign she’s upset. Seriously what are we missing on this story? In both cases Bode has filed legal petitions for joint custody.

So if you are keeping track at home Bode, in the course of a year, could be going from having one child (from a totally different woman) to four (from four different woman). Safe to say the legend of Bode Miller continues to grow!

The back story is simple, but there are so many angles to approach here. While enjoying a sunny December day out on the golf course, Bode Miller nailed his wife, Morgan Beck, right in the eye with a golf ball. The images that Morgan tweeted show how lucky she was. I only say lucky, because Morgan had on a pair of Kaenon sunglasses on that took the brunt of the hit. Morgan says without the sunglasses she probably would have lost her eye. If she doesn’t already I smell a big sponsorship deal between Morgan and Kaenon brewing. Until this incident I’ve never heard of Kaenon sunglasses so already the story has to be paying off for Kaenon.

As an avid golfer myself I have a few questions myself about the incident with the biggest being how in the world did Bode pull this off? I mean, look at the damage done and consider that the ball hit Morgan in the eye in flight, and this wasn’t a shot that bounced a few times before hitting her. I’ve seen that happen before and while it hurts its nothing compared to the injuries Morgan sustained. We’re talking full on, top speed direct hit in the eye (or Kaenon sunglasses). I racked my brain and can come up with only one theory as to how this happened. It’s because Morgan is a girl Now before we get massive amount of emails calling me a sexist hear me out on this. On most golf holes the ladies tees are well ahead of the men’s tees. Sometimes the ladies will walk to their tee box to be ready after the men hit their shots. It’s possible that Bode hit his shot and hit it so poorly that it was a low, line drive and Morgan took it right off the eye. This is the only plausible explanation I can come up with for how this happened. I searched to see if there was an explanation online and haven’t found one yet so if anyone knows the true backstory please by all means email us.

I also have one other comment about this story. I might get killed for saying this but maybe, just maybe, the reason Morgan got hit had a little to do with karma. I’m actually surprised this didn’t get more coverage at the time but here is a quote from Morgan’s blog on October 29th, “I don’t know if I am going to get in trouble for saying this, but I am so excited for Hurricane Sandy. Like nervous excitement. I know it will probably devastate many people, maybe even myself, but there is just something so incredibly awesome about Mother Nature kicking ass (until it kicks your ass, i’m sure)”. I think there are a lot of people in NY and NJ who didn’t share your “excitement” for Hurricane Sandy Mrs. Miller. I wanted to give her the benefit of the doubt and chalk it up to, something,… though I’m not entirely sure what. Unfortunately, I’m not seeing in sort of mea culpa come from Morgan. So could karma have played into this unfortunate golf accident? I’ll let you be the judge of that.

As for the couple themselves we all know Bode Miller as the high-risk downhill skier who has won his share of races but also crashed out of many. His stories of late night drinking sessions are legendary. Morgan Beck is a 25 year old volleyball player/model from California. The couple was engaged in September of 2012 and married in October. Needless to say this Christmas Bode might have to put a few extra Xmas gifts under the tree for his wife to make up for the golf accident. 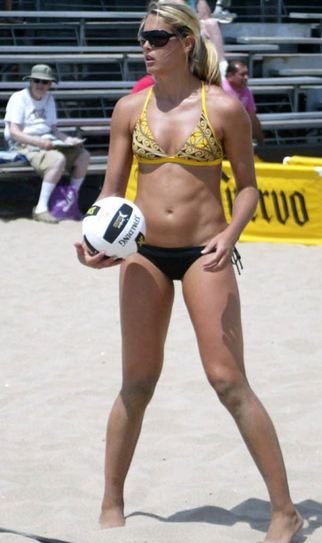