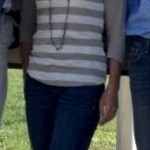 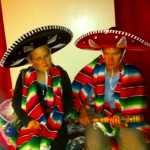 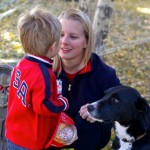 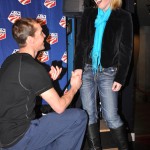 Further proving that winter sport athletes stick together, US Olympic Nordic Combined skier Bill Demong’s wife Katie Koczynski was an international skeleton racer for the US National team. First of all, before we get into details about this sporty couple, you are probably wondering what the heck Nordic Combined is in the first place… I know I was. Well it turns out that Nordic Combined is an event in which athletes compete in both Ski Jumping and Cross Country Skiing. Unfortunately the sport had gained little to no attention in the United States although it received a slight boost in 2010 when Billy Demong made history in Vancouver.

Billy’s wife Katie Koczynski may not have been an Olympian herself, but her three year stint on the FIBT Wold Cup circuit is nothing to scoff at. She competed for the US at the World Championships in 2003, 2004, and 2005 but was never able to place in the top three. At her last international appearance she failed to qualify for the Olympics and retired shortly after to focus on her studies. While Bill continued to train and compete around the world, Katie graduated magna cup laude from Columbia and earned her master’s degree in sociology at Colorado State University.

Believe it or not, Sochi marks Bill Demong’s fifth Olympic appearance and possibly the last of his career. Of course each Olympic games is special, but it is hard to imagine this year could possible live up to Bill’s run in 2010. Not only did Demong win America’s first ever gold medal in Nordic combined, he was selected to be the American flag bearer at the closing ceremonies, and he received international press coverage when he proposed to his long-time girlfriend Katie Koczynski all in one day.

Bill and Katie have an engagement story made in Olympic heaven. I mean the US PR department could not have planned it better themselves. The story goes a little something like this. Before Bill’s gold medal run he put the ring in his backpack where it remained during his race. Just after stepping down from the medal stand, the couple was ushered to a party held in Bill’s honor at the US ski house. As Katie was waiting in line for the ladies room she suddenly heard her boyfriend’s voice as he stood up before the crowd. Katie turned to listen to what she thought was going to be a traditional thank you speech, but instead was surprised when Bill asked her to join him. When she took her place beside him he proceeded to get down on one knee, present the ring, and ask Katie to be his wife. She choked back tears and managed to say yes in front of excited friends, family, and an international audience. Before the Olympics ended Billy and Katie’s story was aired to the world and they became the 2010 “it” couple!