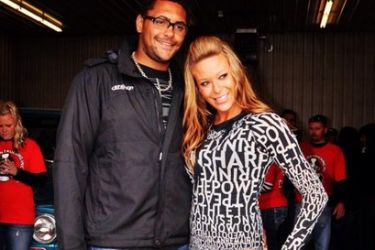 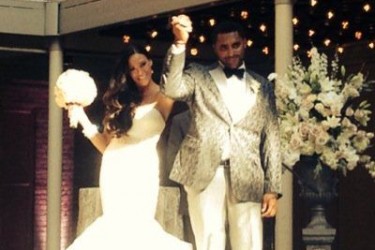 Dustin Byfuglien’s wife Emily Byfuglien lives with him in Canada on a lovely lakehouse where the couple go boating with their daughter Kira and their dog Walter. Walter the dog is a cute and charismatic wire fox terrier. It appears their house is in the middle of nature central because Emily recently took some awesome photos of a bird eating out of her hand and a fox that comes up to their porch to ask for food. Emily said the birds are tame from the locals feeding them, and the same is true of the fox, which she says “makes the rounds to find food.” Sounds like a cool deal to me. If I had a fox coming around my place I’d give it some scraps so it’d keep coming around. Then again, I don’t think there’s any foxes living in Queens.

I wonder if Dustin Byfuglien’s wife Emily Byfuglien asks him about stuff like crosschecking dudes and getting suspend for four games? I always wonder about the post-game wife conversations when stuff like this happens. The wife’s supposed to be supportive, but if she’s watching it on the television and knows anything about the game, you gotta’ figure sometimes she’d be like, “Yeah you totally cheap-shotted that guy and they’re totally right to suspend you.” Dustin is a beast of a defender too. The guy’s 6’5″, 265 pounds, and very fast. Have fun getting crosschecked by him, guys! Hope you’ve got good league insurance. Emily watches pretty much all the games on television when she’s not going to them with Kira. That’s pretty standard for a hockey wife. She also sometimes gets together with her parents to watch them.

Some of Emily’s favorite entertainment is show The Biggest Loser, Melissa McCarthy movies, and Sons of Anarchy. She actually paid money to a charity for a chance to attend the Sons of Anarchy premiere. Canadians are weird, huh? No, but I do like seeing what Emily has to say on her Twitter. She has a good sense of humor and keeps people up to date on her life with Dustin. The couple were only married last July, 2014. Dustin Byfuglien’s wife Emily Byfuglien also posted pictures of the event, and she looked dazzling. 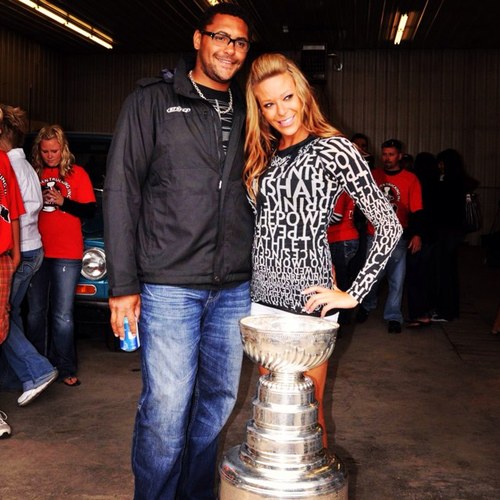