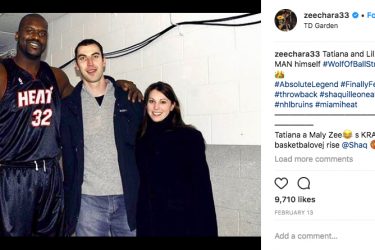 Zdeno Chara’s wife Tatiana Chara has her hands full.  Not only does she have to contend with the captain of the Bruins and his hectic lifestyle.  But, she also has to chase around twin boys.  Tatiana gave birth to Ben and Zach in March of 2006.  The Bruins captain missed…… one…. ONE… morning skate to be with Tatiana.  Some people might be surprised by how little time he took off.  But, in Boston, we’re a little surprised he took that much time.  Big Z doesn’t take time off.  Even if it involved Little Z, Zach Chara.

The couple was together for almost 10 years before taking the leap and tying the knot.  Zdeno Chara’s girlfriend became Zdeno Chara’s wife on July 14, 2007.  The wedding took place in Zdeno’s home country of Slovakia. Besides their twin boys as mentioned above, there are more Chara’s at home.   Eliz Victoria Chára was born in May, 2009.  Now despite being a badass on the ice, Z loves life off it and can melt that exterior shell.  His Instagram post poignantly dedicated to his kids revealed all that and more.

Zdeno Chara’s wife is an inspiration off the ice

Zdeno is taking his wife’s lead. While playing in Ottawa in 2001, he was impressed with his wife’s profession as a financial planner for TD Bank. Zdeno enrolled in school to follow in her footsteps after retirement and earned his degree 2005.  In 2015, Zdeno was awarded a real estate license.  If this whole hockey thing doesn’t work out, he has options.

Zdeno credits his inspired play on his newly formed plant based diet.  Tatiana has helped him stay on track on the road.  An article in the Boston Globe noted the following:

After road games, he sometimes tucks into tofu on the plane. The travel crew adapted a recipe from Tatiana, Chara’s wife, for the entire team to enjoy postgame: rice pie with egg whites and dried fruit. Chara’s performance proves that even a 6-foot-9-inch colossus does not need porterhouses to fuel or rebuild his bulging muscles.