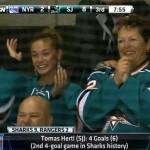 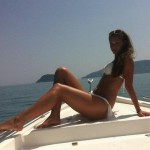 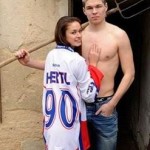 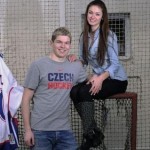 San Jose Sharks rookie forward Tomas Hertl is the new rage. And Thomas Hertl’s girlfriend Aneta Netolicka is right up there with him.

The couple from the Czech Republic is quite a pair. The lovely Aneta Netolicka is a gymnast. According to lucywho.com she’s the 74th most famous gymnast in the world and the 41st most famous Czech celebrity starting with the letter “A”. Since there isn’t much information going around about the gorgeous brunette, it’s possible her fame may be due to the fact that she’s dating Tomas Hertl.
Apparently Tomas Hertl’s mother likes her son’s choice in women. She was photographed sitting next to Aneta Netolicka when Tomas Hertl scored four goals in the Shark’s win over the New York Rangers this past fall.

Aneta Netolicka’s stunning looks and Tomas Hertl’s obvious fate as a future NHL star have drawn the inevitable comparison to an iconic Czech photo. It was Jaromir Jagr who posed with a former girlfriend before becoming a Hall of Famer. In the photo, a shirtless Jagr held a pitchfork while his unnamed girlfriend sported a Jagr jersey and leaned up against him. Recently, a Czech news outlet got Tomas Hertl and Aneta Netolicka to recreate the famous shot. After that, one thing led to another and Aneta Netolicka became somewhat of a star on Twitter.
After that, there was the solitary bikini photo published on a Czech sports site that sent US sports bloggers into a frenzy. But it hasn’t distracted the media from taking their eyes off Tomas Hertzl. On Decemeber 31st Tomas Hertle underwent surgery in Cleveland to repair damage to his right medial collateral ligament and posterior cruciate ligament. As of March 19th, CSN Bay Area reported Tomas Hertl’s knee is healing. Although he’s not skating at close to full speed yet, he started picking up the pace of his workouts. It won’t be long before he’s back on the ice, and when he does, he’s bound to become a force of nature once again. Keep both eyes on this couple! 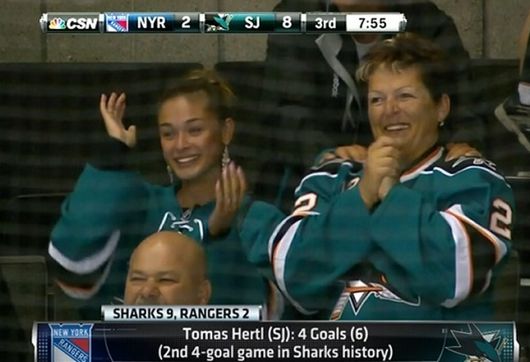