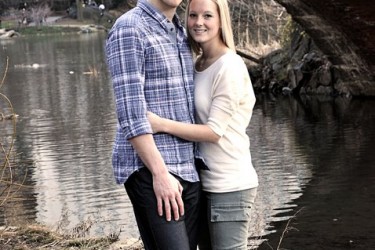 Before we get to Marc Staal’s wife, let’s talk a little bit about Marc and his hockey family. By hockey family I don’t mean his teammates; I mean Marc and his five brothers whom play hockey. Think about it,… that’s enough Staal brothers for an entire line plus a goalie, though Marc would have his work cut out for him as the only defenseman in the Staal clan. There are so many Staals, three in the NHL alone, that a Staal brother drinking game has been created. Rules are here in case anyone really wants to get wild on a Friday night.

Ok, enough about the brothers let’s focus in on the reason you’re here: Marc Staal’s wife Lindsey. I’m glad we got Lindsay up on the site as she is definitely one of those girls that is real cute, but at the same time not to the point where I think I have no shot with her. The couple have known each other since high school in Canada. Marc proposed on Christmas in 2010 and the couple married in August of 2011. Marc is the second Staal to get married. His older brother Eric got married around the same age as Marc, 24.