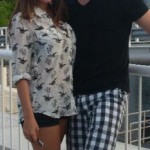 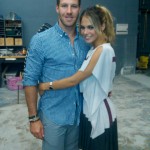 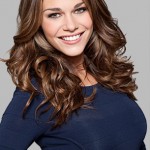 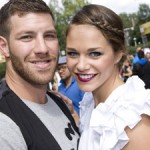 Let me tell you one thing: virtually no one outside of the New York area code would know Brandon’s name if it wasn’t for his smoking hot girlfriend Marie-Pier Morin. I’d like to think I’m a big hockey guy but I had no clue who Brandon was until researching the wives and girlfriends of the 2012 NHL Stanley Cup Playoffs. Looking at his stats I can see why I had no clue who he was (82 games, 5 goals, 12 assists, and a -1 plus/minus rating for the whole season).

Due to Marie, Brandon is becoming a household name for some people. Many people may recognize Maria as a Deal or No Deal model, who appeared on the Canadian version of the show (but I could be wrong on that). Like most of the girls on the show she is also an aspiring model.

The couple has been together for over two years, though the relationship hasn’t always been smooth. According to Page 6 of the NY Post, Brandon was caught red handed with another girl, and a famous girl at that. In early 2011 Brandon was spotted with Michelle Trachtenberg who many of you are familiar with from the TV show “Gossip Girls.” Despite this story being all over the papers the couple is still together and was a big part of the last 24/7 on HBO for the Winter Classic.