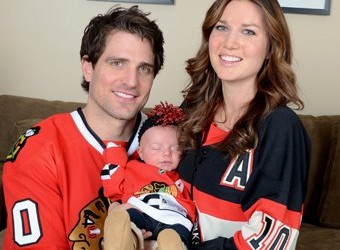 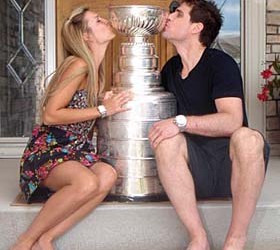 Patrick Sharp is apparently a handsome man. So handsome in fact that he was the cover boy for Chicago magazine’s “50 Most Beautiful Chicagoans” issue in 2011. Sharp, who has been in Chicago since 2006, is a popular player in the city, so the world wanted to know, who is Patrick Sharp’s wife?

Well, in that same issue of Chicago, we learned more about Patrick Sharp’s wife Abby Sharp. Patrick and Abby met while he was playing college hockey at Vermont, and were married in Rhode Island in the summer of 2010. The couple had their first child, daughter Madelyn Grace, in December of 2011. Abby went into labor during a game in which Sharp scored an overtime winner against the Islanders. Sharp described his postgame call to Abby to the Chicago Sun Times,

“I called my wife after the game and was expecting to hear congratulations, nice goal or good game or something. The first thing she said was, ‘I think I’m having the baby tonight.’ I forgot about hockey pretty quick.”

Sharp, who’s described as a model father, seems to be one of the good guys. In a behind the scenes article in his 50 Most Beautiful Chicagoans, he explains how Abby help keeps him grounded, After being asked how he’s stayed out of trouble, Sharp states:

I certainly had my time in college. I think anyone who’s been to university—or especially the University of Vermont—knows how to have some fun, and I did. But [my wife, Abby, has] been with me for ten years now, and we’ve been through a lot. It was a great weekend getting married, and things have been awesome ever since.

In the same article, when later asked about getting too full of himself being officially declared beautiful, he knows Abby will keep him in check.

She laughs and shakes her head. She says that people don’t know the real Patrick. She always says, “If people actually met you, you wouldn’t be getting all this kind of stuff.” She’s proud of it—I guess. 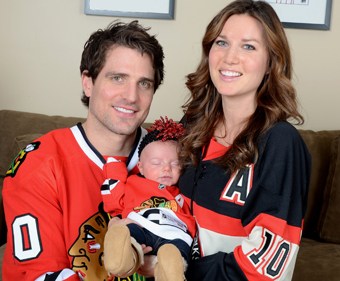