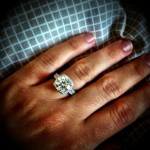 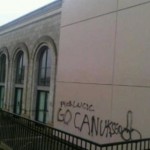 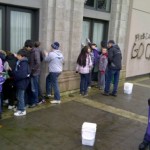 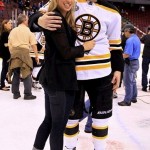 UPDATE: 07/15/2012: Appears that Looch was finally ready to lock this one down. In a tweet sent out in mid July, 2012, Brittany Carnegie seems to show off a brand new engagement ring. No dialogue included with the picture, but the picture certainly speaks for itself. Congrats to the couple, and here’s to them getting married in Boston since they both seem to have soured on their Vancouver hometown.
Thanks to TheAwesomeBoston.com for the heads up on this one.

02-17-2012: Brittany Carnegie, on her protected Twitter account, posted a photo today of what some real classy Canucks fans did to the walls of the Saint Archangel Michael Serbian Orthodox Church in Burnaby. You see, Lucic grew up in Vancouver and this was the church he went to. So what better way to get back at the team that beat your team fair and square than to vandalize a church? And really, if you’re gonna vandalize a church (which, for the record we think is awful and would never condone) at least you could properly spell the name OF YOUR OWN TEAM. Also, if you think that’s what the male genitalia looks like – you might wanna get yourself checked out, ’cause you might just have elephantitis. Later in the day came word and photographic proof, from the National Post’s David Ebner, that local school children were taking it upon themselves to help scrub the church clean. Hope that makes those vandals feel like the losers that they are.

09-07-2011: Late last night at about 1:30, likely coming home from the Shawn Thornton Dropkick Murphy’s private concert, Milan Lucic was questioned by police outside a Starbucks. This all came after the police observed Lucic yelling at his girlfriend, while she was on the ground. The police found no visible injuries and Brittany was adamant that Milan hadn’t touched her. During the police questioning though, Lucic apparently slammed his cell phone down on the ground and said “Do you know who I am?” to the police. Classy.

So we’re going to tread very lightly as to not piss Looch off. In an interview with the Improper Bostonian, he was asked what he thought about the site Milan Lucic’s Girlfriend (to be clear – this isn’t our site – totally different site which we elect to not link to). His response:

I absolutely hate it, because everything on there is false.”

We do know that Milan has been dating Brittany for a long time, and according to Marc Stuart in a journal entry on ESPN.com, the two now own their own place and live together in the Boston area.

Alongside other Bruins wives, Milan Lucic girlfriend Brittany Carnegie recently worked with the MSPCA to help raise funds for local animals in need. Their last fund-raiser was the 2011 Tour de Pooch and Pals Spin, which took place in various gyms across Massachusetts.

During the 2009 playoffs, Looch took some flak from his teammates for openly admitting that Brittany took him to see a Britney Spears concert. To make matters worse, Lucic then admitted to liking her music when he was in 6th or 7th grade.