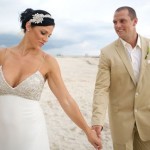 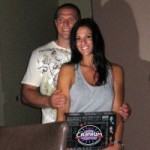 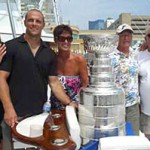 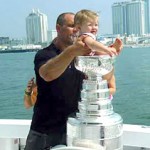 UPDATE: 11-23-2011: After winning the Stanley Cup, traditions holds that each player on the winning team gets to spend a day with the Cup as he pleases. In what has surely been done before but still pretty cool in our book, Dennis Seidenberg, and his wife Rebecca Seidenberg, decided to baptize their newborn in the cup. And to make it even cooler, they did it on a boat. So when that girl gets older, she’ll be able to tell people that she was baptized on a boat, IN the Stanley Cup. Pretty amazing.

Not much is known about the mysterious Mrs. Becky Seidenberg. We do know that she’s American, as native German Dennis explains in this quote to NESN about celebrating Thanksgiving:
“I do [celebrate Thanksgiving], because my wife is American. So I just kind of went with it and now it’s a nice, relaxing day and it’s been fun the last few years.”
Dennis and Becky have two daughters (one born in October, 2010), Noah and Story. 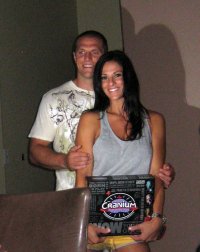