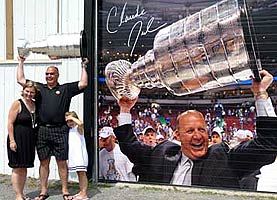 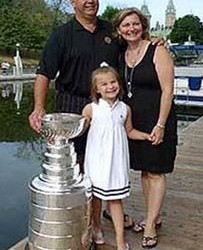 Bruins coach Claude Julien got a jump on family later in life. Claude Julien’s wife Karen Julien gave birth to their only child in 2006, when Claude was a sprite 46 years old. Following the Bruins Stanley Cup in 2011, their daughter, Katryna Chanel, became a popular child around New England when pictures of the then 5 year old celebrating with the Cup began circulating the web. The video below features the perfect quote from the excited “about to turn 6” year old when she describes Lord Stanley’s trophy by saying “I like touching it, I like holding it, but most of all, I like winning it,”

While 46 is older than I’d want to be for my first child (hell 31 was old enough), it seemed to make sense for the hockey lifer Julien. After spending all of the 80s and some of the 90s playing in the NHL, Claude quickly moved into the coaching ranks bouncing around a number of minor league cities before finally getting his first crack in the NHL in 2003 as coach of the Montreal Canadiens. With an unstable living situation and constant travel, holding off till a more secure situation happened made sense for Claude and Karen Julien. Should he lead the Bruins to win their second Cup in three years his living situation should get even more stable.

Claud, Karen and Katryna all live in Lexington, MA.