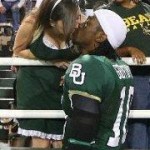 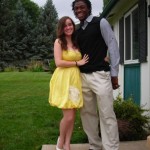 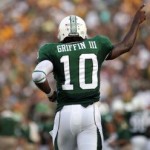 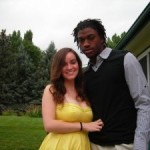 Robert Griffin’s wife Rebecca Liddicoat gave birth to the couple’s first child in May of 2015, a girl named Reese Ann Griffin. So now we have Robert Griffin, Rebecca Griffin and Reese Griffin. You could say that we now have RG3. Yup, I went there. And it was amazing, don’t deny it.

After years of dating, and enjoying their first full season in the public view, Robert Griffin III married Rebecca Liddicoat on July 6, 2013. The couple were introduced by mutual friend in March of 2009, but their first date was a bit awkward. As Rebecca explains:

When I first met him, I thought he was a little weird. I was a little nervous, and I asked him why he was wearing girls socks. He had on those weird socks he always wears.

RGIII was just getting out of a prior relationship and wasn’t really looking to get into another – but life has a funny way of getting in the way of your best laid plans. After dating for a year, following Baylor’s 47-42 victory over Kansas State in October of 2010, Robert Griffin proposed to his girlfriend Rebecca Liddicoat.

After the game, RGIII had Liddicoat meet him in the teams indoor athletic facility, where she was met with lit candles, surrounded by family and serenaded by Griffin who had a teammate playing guitar behind him, before Griffin dropped to one knee. Griffin and Liddicoat were given the gift of celebrating their one year engagement anniversary on Griffin’s only bye week of the season. 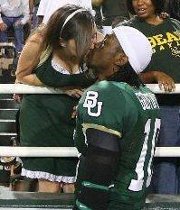