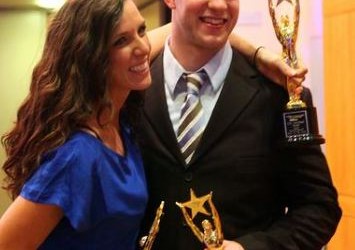 Taking over a starting quarterback job is exciting, but it’s also incredibly stressful. The month of July leading into camp is particularly stressful, getting ready physically and detailed into the playbook. Just days before camp opened in July, Jake Locker’s wife Lauren Greer gave birth to a baby girl. I’m sure Jake is enjoying the life balance of NFL training camp and diapers. One thing I can safely say about Jake and Lauren’s new baby is this, she is going to be one athletic child.

Now we all know about Jake’s athletic prowess but Lauren can come close to matching Jake step for step in that category. Lauren was a big time player for the University of Washington Huskies softball team. Originally from Placentia, California Lauren made her way up the coast to attend college at UW. In case you were wondering where Lauren got her softball skills, she was lucky enough to have her father, Brian Greer, who played in the Padres system. Along with that her brother Keith played football at Idaho.

One area Lauren trumps her husband is in team championships. As a senior Lauren helped Washington win the softball national championship in 2009 with Jake in attendance. Jake’s college teams, for lack of a better term, sucked. Take the 2008 team for example, they went 0-12. Don’t think Jake will last very long in the NFL if he posts a winning percentage like he had in college.

As you can well imagine Jake and Lauren met while at college. Jake and Lauren got engaged right before Jake’s last college football game in December of 2010. The couple got married in Jake’s hometown of Ferndale, Washington on July 3rd 2011.