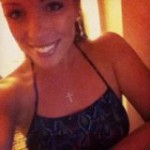 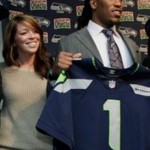 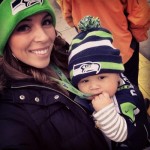 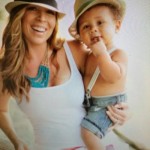 Alyssa Hackworth-Irvin, was infact a tennis player at the University of Charleston, and has continued playing tennis after graduating (though not professionally, she is playing competitively in local tournaments). The couple has a child, son Brayden, born in 2013.

The Irvin family is one we can all get behind given their success in life outside of football.

We admit that our posts titles can sometimes be unintentionally deceiving. In the case of Bruce Irvin’s girlfriend Alyssa Hackworth, we are speaking with a high level of confidence about a subject we’ve never gotten 100% confirmed.

Our best research seems to indicate that the couple was dating as of April, 2012, when Alyssa accompanied Bruce to Seattle for his first press conference as a member of the Seahawks. That would lead most to believe that the relationship was pretty serious. I mean bringing your girlfriend to a press conference, the first time the world gets to see you on the big stage, that has to be a serious relationship right? Why else would you bring sand to the beach? The relationship trail goes cold from there. Actually, little else is known about Alyssa. We’re pretty sure that she played tennis at the University of Charleston, which would make sense since Bruce went to WVU, but we haven’t been about to 100% confirm that.

For those that don’t know the back-story on Bruce it’s extremely interesting. I actually feel another semi-feel good Disney movie coming out of this one. Bruce was more or less homeless while in high school and got arrested for robbing a drug dealers house which is a bad idea on some many levels. Lucky for him the drug dealer didn’t testify against him (why would he, he’s a drug dealer after all) and he was let off. Eventually Bruce got his GED, got into a junior college and worked his way up to West Virgina University. Like I said, has Disney written all over. 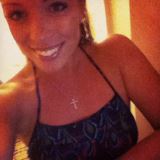