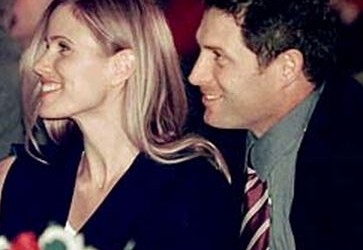 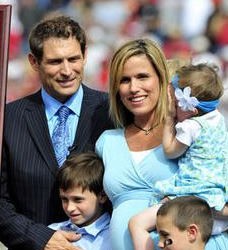 Growing up, Steve Young was one of my favorite players. Since my local team was no good (Falcons), just like any normal kid I rooted for the team that won. With the next to unstoppable Young to Rice combination, the 49ers did just that. When they finally won the Super Bowl in 1994, I was elated. It probably also didn’t hurt that Young was from my home state of Connecticut. As time went by and I grew up, my allegiances (and living situation) changed. Eventually, Young retired as one of the all time greats and seemed to disappear into his post-football life. What I was surprised to learn about Young is that he didn’t get married until 2000, at age 38.

Steve Young’s wife Barbara Graham first met him through a friend in the early 1990s, which coincided in the height of his career. Clearly, this did not impress her and they never went on a date. She reconsidered in 1999, when they went on a blind date. Shortly after they were married in Hawaii in March 2000, Young joked that if she had just realized she liked him back then, they could already have 5 kids. Well, I should say partially joked because they wasted literally no time in having their first – first son Braeden was born 9 months after their wedding. In true Mormon fashion, the couple is up to 4 children, consisting of two boys and two girls.

Graham is a former model and graduate of University of Arizona. Out of college she worked in public relations but we’re pretty sure she is busy raising kids now. Despite the timing, Graham said she did not influence Young’s decision to retire after the 1999 season, stating she would have supported him either way.

Young was initially quiet post-retirement, but that didn’t mean he was sitting around doing nothing. He received a law degree from BYU Law School in 1995. Another interested related note is that Young is the great-great-great grandson of Brigham Young, who is the school’s namesake and was the second president. More recently, Young has been back in the spotlight as part of ESPN football crew. He also appears in advertisements for multiple companies including Van Heusen. 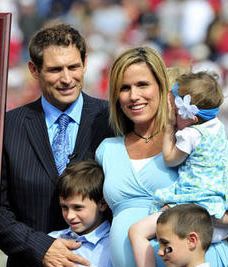