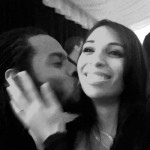 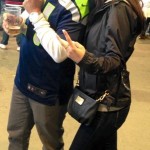 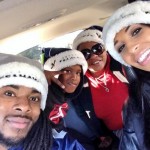 Richard Sherman’s girlfriend becomes Richard Sherman’s wife!  In March of 2018, Richard Sherman and Ashley Moss tied the knot at the Hard Rock Hotel & Casino Punta Canta.  Plenty of Sherman’s former teammates were in attendance, including  in the Dominican Republic.  Richard and Ashley got engaged in 2015 shortly after the birth of their first child, Rayden.  Their second, a daughter named Avery, was born in 2016.

Richard Sherman’s wife is the Executive Director of Blanket Coverage, the Sherman Family Foundation.  The foundation’s mission statement is listed as

Blanket Coverage, the Richard Sherman Family Foundation, was formed in 2013 by Richard Sherman to provide students in low-income communities with school supplies and clothing so they can more adequately achieve their goals.

Classy endeavor by a classy family.

Beautiful Nights with the Wife @_mrssherman22

Congratulations to Richard Sherman and his girlfriend Ashley Moss on the birth of their first child, a son Rayden Sherman.

Rayden was born on 2/5, which did not escape the notice of his father who tweeted:My son sure does know how to make an entrance! 2/5/15… Is it a coincidence or is he just that clever?! Either way I’m ecstatic

Congratulations to the Sherman family!

Could Richard Sherman’s girlfriend Ashley Moss have an impact on the outcome of Super Bowl 49? If the couple’s expected son decides to come on game day – it just might.

The 9-month pregnant Ashley Moss did make the trip to Arizona for Super Bowl week, and is due within the week. Sherman predicts that their unborn boy will be “a disciplined young man and stay in there until after the game. He’s going to do his father his first favor and stay in there for another week or two.”

But if he does – what would Sherman do? Sherman dedicated tiptoed that question with the press on Thursday:

“He’s not supposed to come on Sunday. If he does, that would change some things. I’ve thought about the possibility of his coming during the game or coming before the game. We have things in place in case that happens. We’ll cross that bridge when we get there. But I didn’t know it was a topic of national debate, honestly. I would not like to miss the birth of my first kid, but hopefully and God willing, we won’t have to cross that bridge.”

As a new father myself, I can say this. I could never imagine missing the birth of my son. If Sherman decides that the birth of his child outweighs the game – absolutely nothing but respect from us.

How does Richard Sherman’s girlfriend Ashley Lillian do it exactly?

While 31 other fan bases get annoyed with the guy, Seattle has embraced him as one of the on field fan favorites. Richard Sherman’s girlfriend Ashley is one of those fans. Ashley, who formerly waited tables at Joey in Seattle, is a diehard Hawks fan and while there’s not a ton of information about her readily available, but she’s quick with a supportive Seahawks tweet, especially during gametime.

Sherman, full of bluster and plenty of brashness, is one of the few who can get away with it as his play backs up his trash talk. Famously inserted into the national vernacular following a 2012 game against New England, Sherman has pointed his acerbic tongue at plenty of players including Trent Williams, Darrelle Revis, Skip Bayless, Joe Haden, Roddy White, and Tom Brady again. Though he’s a lightning rod on the field, it’s pretty apparent that he’s a good guy in reality. The Stanford grad (who is also enrolled in the Master’s program there) is a charitable player. During the holidays, Richard and Ashley drove throughout Seattle surprising fans and delivering gifts to families in need. He also hosts the Richard Sherman Celebrity Softball Game, which raises funds to help the Homes for Heroes project, which helps veterans, firefighters and police buy their first homes. And as much as we hate to admit it,… Sherman is pretty great with his fans, often retweeting support and replying to well wishes from plenty of the 12th Man members (who stole that gimmick from Texas A&M,… it’s OK Seattle,… you did it,… but it is ok).

No matter how you look at it, there’s plenty to talk about with Richard Sherman, but only one question left: Can he help lead this Seahawks team to a Super Bowl title? Patriot, Bronco and 49er fans are all praying this is their opportunity to scream, “You Mad Bro?”