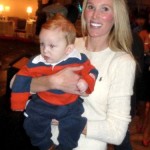 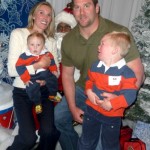 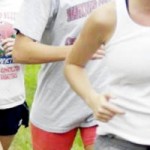 Justin Smith has never been a man to garner much recognition. In a feature covering the recently-voted most underrated player in the NFL, ESPN chronicled the man who loves to shy away from the spotlight discussing life on and off the field. The dominant defensive tackle for the stout San Francisco 49er defense has come a long way in his twelve seasons in the NFL, but has always had a constant with him. Justin Smith’s wife Kerri Smith has been a steady presence in his life, both during the season, and tending to their off the gridiron pursuits.

Justin and Kerri Smith own a golf course in Holts Summit, MO, near his hometown of Jefferson City. The couple keep rates reasonable to keep the course accessible to the average working stiff. Though the couple now resides in San Jose, they used to return to their course every summer, helping to tend to the facilities. Justin proudly bought Kerri a chainsaw to maintain the bushes, while he’s frequently keep the greens mowed short and fast.

Justin Smith and the former Kerri Hils have been together since attending Missouri. The couple met in a gym on campus, while Kerri was a long-distance runner on the track and field team. When Justin was drafted by the Bengals, in an effort to remain close to her boyfriend, Kerri transferred to Xavier, where she ran the 800-meters, 1,500-meters and an event called the steeple chase (it’s named for exactly what it sounds like). The pair were married not long after and now have two sons together, Wyatt and Rigg, and two dogs, Bear and Red. Hils remains at Xavier where, this spring, she hopes to compete in the National Collegiate Athletic Association track championships – which is all the more impressive considering that Xavier doesn’t even have enough runners to form a track team.