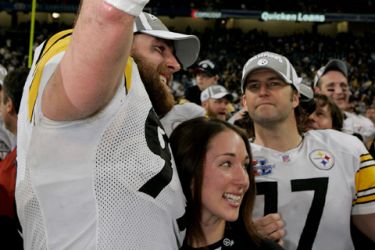 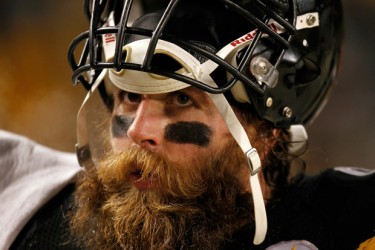 UPDATE: 02-10-2012: These days, it seems like a pretty rare occurrence when an athlete in the mainstream news for something good. For the second year in a row Brett Keisel has made the news while shaving his beard to raise money for charity. The second annual “Shear The Beard”, when Keisel shaves his massive beard, was a huge success – raising more than the $40,000 that the event raised last year. The beard-shaving/fundraiser supports the cancer program at Children’s Hospital. The event also allows many celebrities, including Mike Tomlin, James Harrison and Aaron Smith, to actually help out and physically cut Keisel’s beard.

Brett and Sarah began dating in high school, staying together through college, and are now married. They have one son together, Jacob.

So by now, most everyone has heard Brett’s crack about why the Steelers are in the Super Bowl. (“”The beard is why we’re here,” cracked Keisel. “It’s unleashed Super Bowl power on our whole team.”) But what does his wife think of the beard?
“Hopefully we’ll win, I can go home and pull the Lombardi out of the beard for all the fans to see, and then I think I’ll have to whack it off or my wife might leave me. She doesn’t really remember the guy she married, but she gets to wake up to this every morning and at least get a chuckle. She gave me a razor for Christmas, and it’s still in the package. But I’ll have to break that out eventually.” 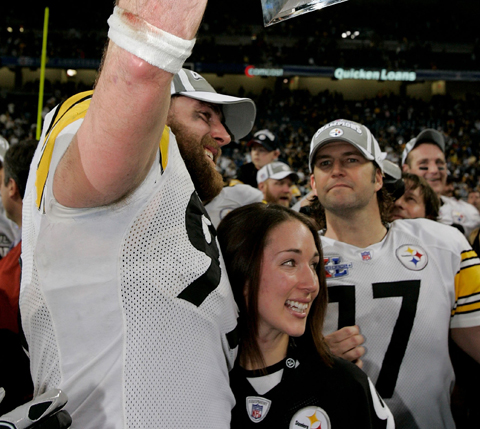