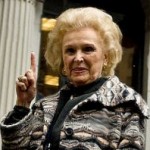 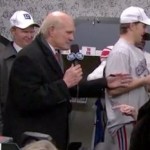 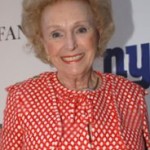 Most recently in the news for being the crazy old lady possibly trying to kill accosting Terry Bradshaw on live TV after the Giants defeated the 49ers in the NFC Championship game to advance to the Super Bowl, Ann Mara is the 82 year old widow of Wellington Mara and the mother of current Giants President and CEO, John Mara. As the elder stateswoman of the Giants, Ann Mara has received her share of media attention especially since the passing of her husband, former Giants President and co-owner Wellington Mara, thrust her into the spotlight even more. After seeing Bradshaw pick against the Giants week after week throughout the 2011 season, Ann Mara apparently had enough and approached him during the post-game interviews. After her son John attempted several times to pull her away from the broadcast, Ann Mara finally broke though and poked Bradshaw in the arm to get his attention and said ‘You Never Pick the Giants’, loud enough that we could all hear it at home. Though Bradshaw immediately apologized to her, there is no word on whether he’ll be picking against the Giants again today.

As if the attention she received from her throwdown with Bradshaw wasn’t enough, Ann Mara was in the news again just days later when she broke her shoulder. On the way home from church (where she was no doubt simultaneously praying that Tom Brady go easy on the Giants and also for forgiveness for her assault on Bradshaw), Mara fell and broke her shoulder. The Giants, in typical fashion, are reporting her as ‘probable’ for this weekends game. She’s a tough broad and we highly doubt she’ll let something like a broken shoulder keep her out.

Wellington and the former Ann Mumm were married in 1954 after they met two years earlier in a fairytale fashion: during church at St. Ignatius Loyola in Manhattan, the two both rushed to the aid of an old lady who had fainted. The rest, including 11 children and a whopping 43 grandchildren (including actresses Rooney and Kate Mara) and an even more impressive 11 great-grand children (with two more coming very soon), was history.

In an homage to Ann Mara’s now-famous granddaughter Rooney Mara (recently nominated for her starring role in The Girl with the Dragon Tattoo), we here at PlayerWives.com have taken to referring to Ann Mara as The Girl who took on Terry Bradshaw. We have to think that if it wasn’t for that broken shoulder, she may very well have put Bradshaw in a choke hold before today’s game and forced him to pick the Giants over the Patriots. Hell, she might do it anyway. 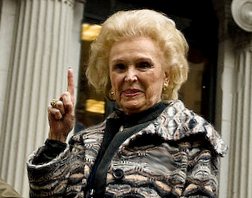