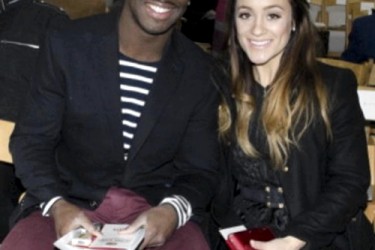 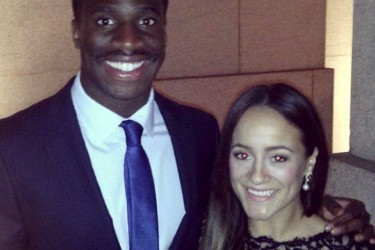 So you might have heard by now that Prince Amukamara was a virgin until his wedding night. Well, Prince Amukamara’s wife Pilar Davis Amukamara has deflowered the young man. The story that rolled out soon after involved Prince’s teammate Antrel Rolle basically saying the team is happy for him and that he has a bit more swagger in his step now. I find the comments on some of these articles pretty funny. One such comment reads “chances that Pilar was a virgin before marrying the Prince= zero.” Another one reads, “I lost it a decade ago, still zero swagger.”

The swagger patrol is on the loose! So let’s talk about Prince Amukamara’s lovely wife Pilar. She first met Prince at a nightclub, and Prince told some of his friends he was with that he was into her. He didn’t really know what to do, but they eventually got to talking, and Prince told her he was a manager at GAP. Man, this is so weird to me. It’s like reverso-world, where he is purposefully trying to avoid using his easy-lay ticket (being an NFL player) and instead trying to appear to be an average schlub. So she gives him her email address (because he thought asking for her number was too forward). Only after that does she learn he plays for the Giants. Incidentally, Prince did not and has never consumed any alcohol.

Flash forward to now, and Prince’s wife Pilar got a pretty amazing marriage proposal. The two were at a Jabbawockeez show, which is essentially a really hip dance performance by a bunch of dudes in masks. So Pilar gets picked out of the crowd to go on stage and get danced to or whatever, and after she’s up there for awhile, Prince dawns a Jabbawockeez mask (unbeknownst to Pilar) and joins the dancing crew. He then approaches Pilar while she’s sitting on stage, takes a knee, pulls out the ring, rips his mask off and proposes to her. That’s pretty slick, man.