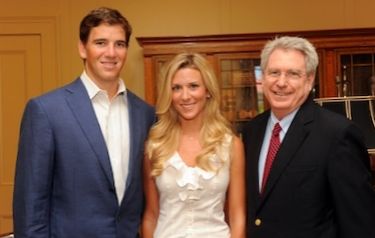 Eli Manning’s wife Abby McGrew Manning married one of the bigger names in the league, but she does seem to keep an air of humility. With the responsibilities of motherhood, women tend to cut out the unnecessary stuff. This is a fairly storied relationship, and Abby is a big name in the world of professional sports wives. Let’s delve deeper in a classy and restrained lifestyles-of-the-rich-and-famous style, shall we?

Firstly, the big news for Eli Manning and wife Abby Manning came in 2019 when finally, FINALLY, Eli and Abby had a son.  it wasn’t for lack of trying, as they have three previous kids, all daughters.  In addition to Lucy and Ava, Caroline was born in 2015  Charles “Charlie” Elisha Manning was born on Super Bowl Sunday, of 2019.  Of course a Manning kid would be born on Super Bowl Sunday.  Of course. I wonder if Eli was secretly bummed when he missed the train for having a son not once, not twice, but thrice. He acts fulfilled, but come on – he had to want an heir to the quarterbacking throne of greatness.  Now he finally does!

Abby has decorated their 3000 square foot condo in Hoboken with all kinds of goodies. I live a few miles from Hoboken just across the Hudson. Hoboken has turned into one of the most expensive neighborhoods in the NYC area. For starters, the place is one of those Bill Gatesy-type joints.

Everything’s automated and controlled with a touch of a button. Speakers hidden in bookshelves, thermostats that sense who’s in the room and adjust accordingly. Courtesans of the night that fall from chutes when the wife and kids are away. No, that last one is untrue.

Apparently Eli Manning’s wife, the former Abby McGrew, is a devoted philanthropist. The couple’s many gifts have included money for St. Vincent’s hospital to build a “holistic birthing center”. The layperson often refers to this as a “dome of pain”.

Abby and Eli have been together since college, so of course they make sizable contributions to the University of Mississippi. Giving money to any institution of learning in Mississippi automatically makes you a saint. Mississippi native John Grisham needs to include Eli and Abby in a football related courtroom bestseller just for that. I don’t know about you, but I would read that. 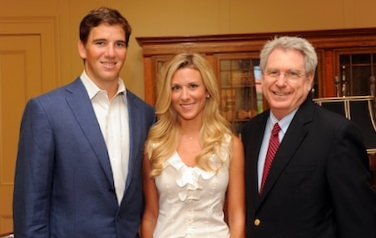