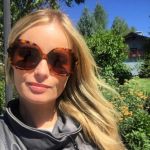 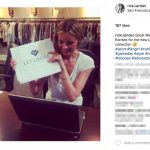 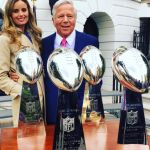 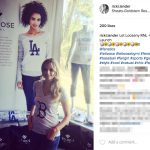 Bob Kraft’s girlfriend Ricki Lander holds a special place in PlayerWives.com’s proverbial blog heart.  Hitting the wayback machine to 2012, when the infamous audition tape came out.  The Patriots owner was haplessly reading lines with Lander in advance of her audition.  The internet blew up, loving to see the normally buttoned up Kraft in a moment of loose candor.

Enter PlayerWives.  We were the first ones to determine who she was.  And while we ultimately learned our lesson that being first matters about as much as being last when it comes to SEO rankings, we still wear that “FIRST” badge of honor with pride.  It would seem that this is her IMDB profile and that she’s an actress/model. She has appeared on a variety of shows including CSI, True Blood and Extra – which she has been so kind enough to pull together clips from on her YouTube page. Ricki attended Florida International University and graduated with a degree in dance.

Since discovering the identity of Robert Kraft’s girlfriend, she became a staple on the New England scene. Walking red carpets, public appearances by his side, and frequent viewings in the press box became the norm.  Ricki Lander’s acting career never quite took off despite the A+ help from her boyfriend. We’ll continue to watch her career as it evolves.

Now, while we all root for true love’s bliss, it may not last forever.  Bob Kraft’s girlfriend may have spent some time as ex girlfriend.  And even if not currently, then TMZ seems to believe they definitely were split for a while there.  The public appearances  dipped from daily, to frequent, to sometimes, to “wait, when was she last out with him”.  In the fall of 2015, the internet was buzzing about the couple suggesting there’s been a split.  By January, 2016, Bob Kraft’s girlfriend showed up on his arm at the Golden Globes, and all was right with the world again.

DID BOB KRAFT’S GIRLFRIEND JUST HAVE HIS BABY?!??!

According to Page Six, yep, she sure did.  But, if you’re asking if the baby is his, well, folks, no one who’s talking knows.  The Page Six report makes it clear that the Patriots owner is going out of his way to both take care of the baby financially,…. and to make zero claims to paternity in public.  From that Page Six article:

Sources say that Kraft is “taking full care of Ricki and the baby,” and he has bought her a Los Angeles mansion and made some sizable financial investments on her behalf. But Kraft will not publicly discuss if he is the baby’s biological father, even with close friends.

However, Lander has been very open about her desire for a child, the sources added.

One of the sources said, “Bob is fully supporting the child. There is a lot of tiptoeing around the subject at the Patriots offices. Everyone is afraid to openly talk about it.” 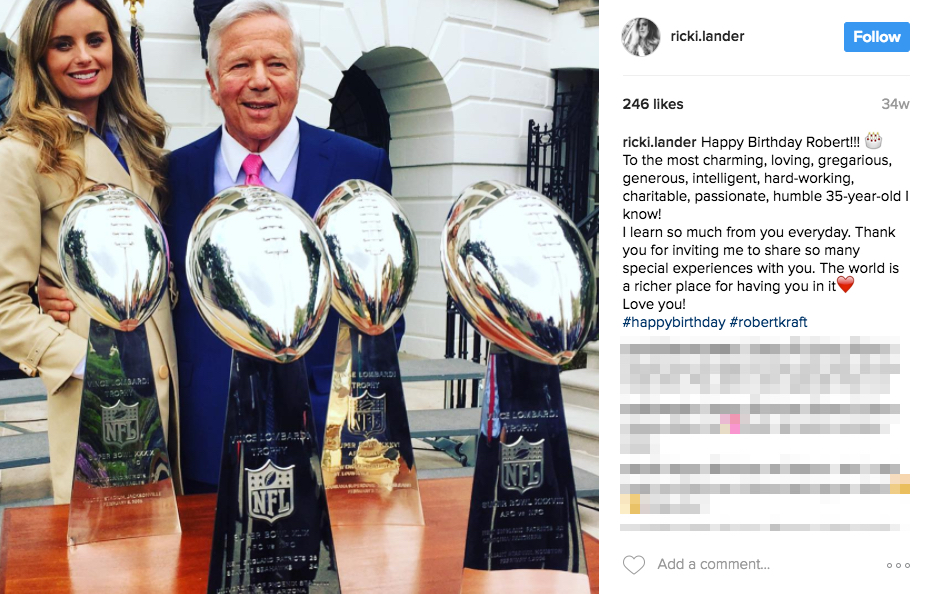