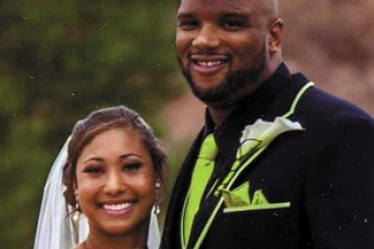 Alan Branch’s wife Ashley Branch is a member of the high school sweetheart club.  High school sweethearts and pro athlete marriages time-honored and tested.  But, my new theory states that the larger and more intimidating the athlete, the more of a likable teddy bear they will actually be. I know, it sounds tenuous, but Mr. Branch lends it some credence. He’s a nice guy and has been bouncing around from team to team in the NFL since 2007, signing 1-year contracts and playing wherever and doing whatever they want him to.

Apparently Alan Branch’s wife Ashley followed him to Michigan University all the way from Albuquerque, New Mexico. Geez, no breathing room at all eh? Well, it seemed to work out for them, as they appear very stable and have two daughters. Those kids are good at packing since Branch has moved from Arizona to Seattle to Buffalo to New England since 2007. That’s fairly standard in the life of an NFL player. Branch got cut from the Bills after a DUI arrest and was picked up by the Patriots two months after.

Alan had this to say about his wife Ashley during that tough transition:

“Honestly, the only thing I did to keep myself going was working out every day and having my wife there to support me and keep my focus right.”

It’s always nice to have someone in your corner to help motivate you.  It’s especially nice after a 1-year contract and getting cut from a team. Tapping into a player’s potential can be a tricky thing, but Ashley knows Alan very well indeed, and she seems to be keeping him solid and providing good support. Alan also got some attention awhile back on media day when he got dance lessons. He supposedly also caught kickoffs in high school and returned them for touchdowns. Just because he’s big doesn’t mean he can’t move. 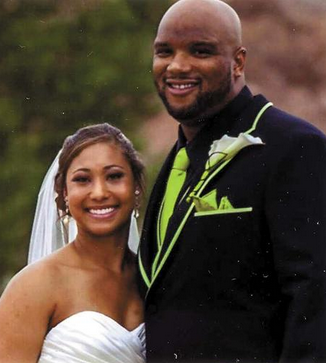