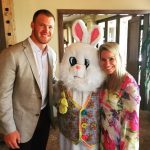 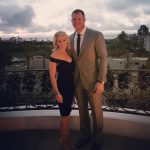 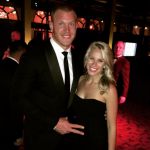 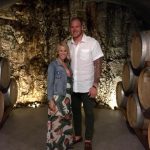 Kyle Rudolph’s wife Jordan Nine Rudolph married him February 13 of 2016 in Cabo San Lucas. It’s hard to beat Cabo for a wedding destination. I’ve seen a few pro athletes get married there. It’s a perfect place to have your honeymoon after the ceremony. You ask your athlete buddies out there to celebrate, but the only problem is running into them during the honeymoon when you’re just trying to get away with your new sweetie. Or maybe it’s not that big of a deal?

Fast forward just about 9 months from that wedding date.  Yes, in late October of 2016, Kyle Rudolph’s wife gave birth to the couples first kids.  A pair of twin girls arrived, accompanied by a statement from the Rudolph’s.

Jordan and I are so excited to share that the twins, Andersyn and Finley, are happy and healthy this morning after being born late last night. Thank you to everyone including family, friends, teammates, coaches and fans for all your support and well-wishes.

They later had their third child and first son, Henry, in 2018. The Rudolph’s have put down their roots in Minnesota, and want to be further embedded in their community.  The Vikings Website has more

The family is deeply connected to the University of Minnesota Masonic Children’s Hospital, in which they opened Kyle Rudolph’s End Zone as a space of respite for young patients and their families.

Kyle Rudolph’s wife went to Santa Monica College.  Before kids, she described herself as a “bulldog mom” because of her two bulldogs. She, of course, shows them off on her social media, and they’re named Char and Brent. Kyle Rudolph’s wife is very much a classic girl next door. She’s the kind of lady that refers to men as “boys.” The Rudolph’s were excited to take some news to a Minnesota Twins game. Alliteration ruled the day!!

Thank you @twins for letting my wife Jordan and I make our announcement! Twin girls due in October! #strike #heat ⚾️⚾️⚾️???

Last year Kyle and Jordan chose to go with the Flintstones motif for their Halloween costumes, and a wise choice it was. Jordan makes a solid Betty while Kyle looks like a brutish hipster Fred with his full-sleeve tattoo.  They’re a traditional group, raised to marry young and take care of bulldogs before they start popping out children. Any time there’s a Notre Dame game, Jordan instantly becomes a huge fan of the Irish even though she has no actual connection to the school other than her husband. She’s a fan-by-proxy, I suppose. She supports anything and everything that Kyle is involved with or into. That’s why she’ll make a great young wife for the big fella’. 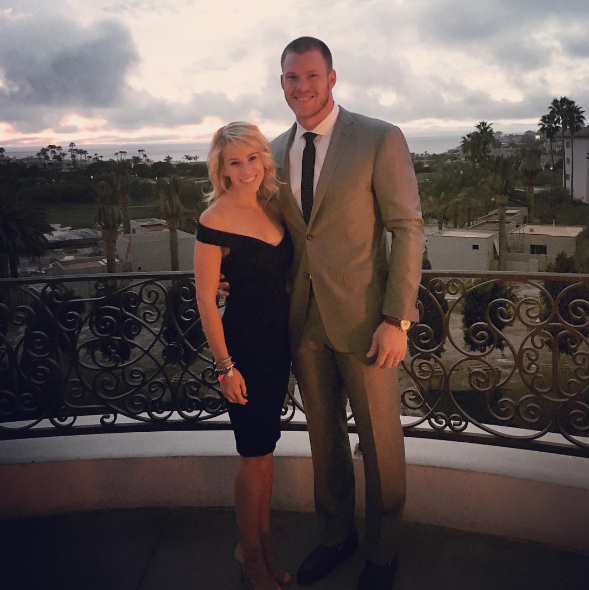