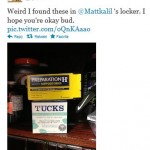 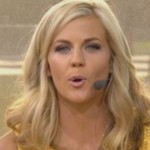 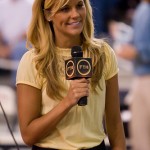 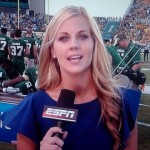 UPDATE: 12/18/2012: Hey, remember when we told you on December 4th that this couple moves thier relationship quickly? Yeah,… we were right.
On Monday, December 17th, 2012, Christian Ponder and Samantha Steele were married in St. Croix (MN) County Court. With the lightning fast pace of the relationship, many were beginning to speculate on why it’s moving so quickly, with the first thought being a shotgun wedding. Steele took the coolest route possible and called people out on Twitter, saying:

Very rarely have we rooted for a couple like this. Hopefully things work out and these two prove the world wrong. Best of luck and congratulations.

Samantha Steele, who was linked to Cincinnati Reds outfielder Drew Stubbs as recently as the summer of 2012, is now engaged to Vikings QB Christian Ponder. The couple met on ESPN’s College GameDay recently., but ironically, the ESPN employed Steele revealed their engagement to Sports Illustrated’s Richard Deitsch. Details of the engagement or wedding are not known at this time.

Christian Ponder is quickly becoming a must follow on Twitter. Ponder put together a legendary day on Twitter on October 18 in both calling out a teammate and publicly declaring who he’s dating.
Early in the afternoon, Ponder went to Twitter with a picture from teammate Matt Kalil’s locker showing what was inside Kalil’s medicine cabinet, including Preparation H and Tuck’s. Ponder simply passed along a get well wish of “I hope you’re okay bud.”

If that wasn’t enough to make you click the follow button, Ponder later took to Twitter to address some rumors floating around about his personal life. A fan tweeted out the rumor, which Ponder candidly answered

When the internet got ahold of this rumor, the digital pats on the back began. One follower Tweeted to Ponder that she was impressed, and Ponder took the attention in stride, saying only:

“haha I’m not gonna lie I am kind of impressed with myself too.” -@cponder

We personally love this. A player who acknowledges rumors and doesn’t hide behind non-denial denials. He doesn’t need to pass along every detail of their relationship, but a simple, “Yup, we’re dating,” sufficed just fine. Most of you know that Samantha Steele is an ESPN on air talent. She was previously linked to Cincinnati Reds OF Drew Stubbs this summer, but no concrete evidence ever surfaced in regard to that relationship. Keep an eye out on these two going forward,… and while you’re at it, keep an eye on Ponder’s Twitter account. Dude’s worth the follow. 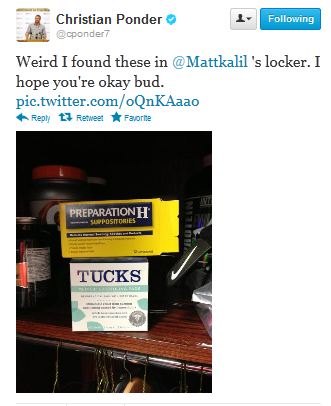