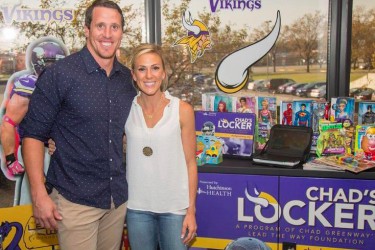 Continuing the longstanding tradition of athletes meeting their wives in college, Chad Greenway’s wife Jennifer Capista met him at the University of Iowa. I think part of this trend comes from young women recognizing the value of an up-and-coming athlete as he’s about to go pro, though this is certainly not the rule, and a lot of times the ladies don’t even know they’re into sports for weeks or even months. Anyway, Jennifer herself was an athlete running track, and now she’s a mom running a household.

The couple now has three kids after Jennifer just gave birth to her new baby girl. Their other two daughters are named Maddyn and Beckett, and by all accounts Chad Greenway’s wife and he are super family folks. Chad himself has said he’s more than content being a suburban dad (which he’s clearly not but you get what he means). It can be rough being the only guy in a household of four, but he says he doesn’t care about that either. This year, Chad and Jennifer started a their seventh iteration of their program called Chad’s Locker, which exists in order to ease the hospital stays of children. Seventh locker opened, folks. What the lockers are specifically are just that– lockers filled with cool stuff for kids in order to make hospital visits suck less. I love this idea.

Everyone has nothing but nice things to say about this couple, so I will continue the trend and say I dig them too. Chad Greenway’s wife gets a kick out of another program that Chad’s involved in, and this time it has everything to do with being a goofball with his teammates. It’s called the Vikings Donut Club, and Chad has turned it into a weird fight club thing where you’re not supposed to even talk about it. Existence of the Vikings Donut Club was first covered in a breaking news report by Sports Illustrated. Basically its just a bunch of guys on the team scarfing donuts in the locker room. But Chad talking about it like a special bonding thing gives you a sense of him and his wife’s character. They like to bring people together, and they do a ton of community outreach stuff that extends far beyond bringing donuts to the locker room! 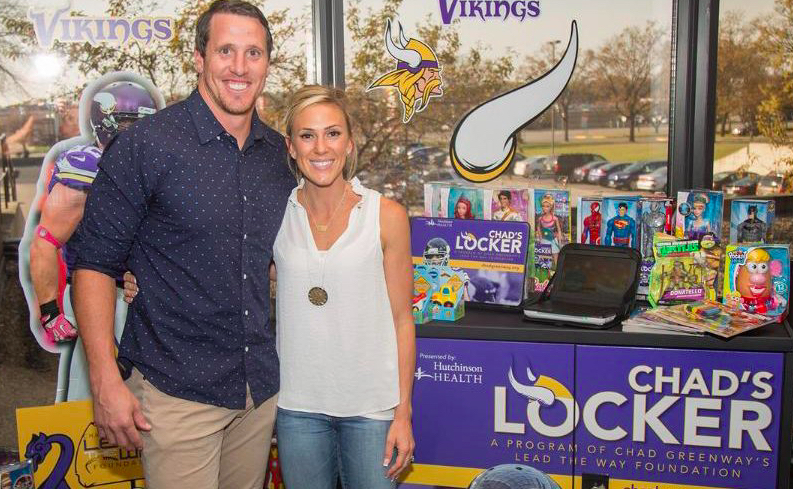