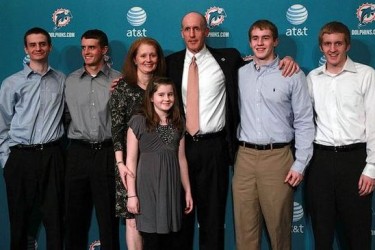 Despite Chad Johnson stealing the show on Hard Knocks this year we also get an up close and personal look at new Dolphins head coach Joe Philbin. I’m sure a lot of people are familiar with Joe for two reasons. His work with the Green Bay offense that made Aaron Rodgers a star and lead the team to one Super Bowl. The other reason is sadly what happened last January when his son Michael drowned right before the playoffs started for the Packers.

This was obviously a very difficult time for Joe Philbin and his wife Diane Philbin. Michael, who years before had been convicted of having non-consensual sex with minors at a house party in the Philbin’s house when the parents were out of town, was found in a river a week before the Packers got knocked out of the playoffs by the Giants. This was a tragic time for the family, who also have a daughter and three other sons. In the offseason Joe was hired by the Dolphins to reshape a franchise that had run off the tracks for so many years. At the press conference to announce Joe as the new head coach Diane had this to say about the tragedy

“All people suffer loss. When you lose someone, it’s part of life, but you have to be resilient. You have to take the bad things and difficult times and turn them into good, and that’s what we will do. And we’ll do it with the Miami Dolphin family.”

Diane comes from a big family so when the Packers made it to the Super Bowl it was tough for her to get enough tickets for the entire family to come down. Somehow Diane worked her magic and all seven of her siblings plus her mother made it for the big game and the Packers Super Bowl win.

At first I thought this years edition of Hard Knocks was going to be a complete letdown. Most teams are very leery of being on the show now that the Jets took the the drama to the next level with their epic training camp in 2011. This point was reinforced by the fact that 31 other teams passed on the show before finally the Miami Dolphins and their fame hungry owner said yes. I feel pretty strongly in saying new head coach Joe Philbin probably wasn’t the biggest fan of doing the show, especially in his inaugural campaign as an NFL head coach. It’s tough enough to get through to players in year one of your regime but add the cameras and that is a recipe for disaster.

It’s safe assuming all 31 teams passed on Hard Knocks, because honestly Miami’s roster is about as boring as it comes. That all changed with the signing of Chad Johnson (nee Ochocinco) which finally gave the show a much needed pulse. It ended up having more than a pulse as Chad dominated the show, much to the chagrin of Joe. We all know what eventually happened with Chad but it also served as a great “I’m the boss” moment for Joe as he was able to cut Chad right on camera, something I’m sure all the players eventually watched. 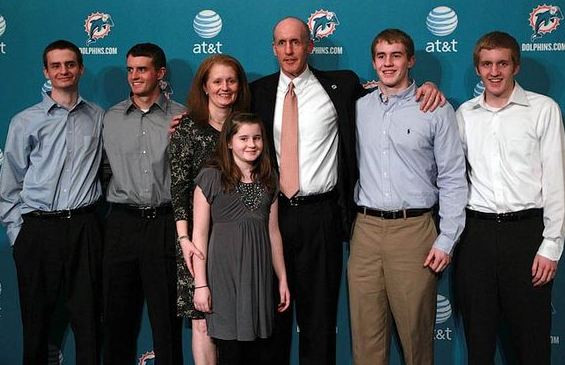