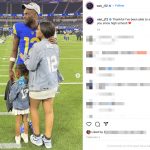 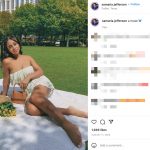 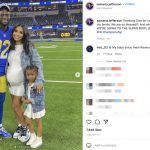 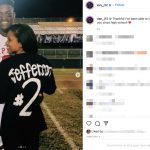 But still.  The timing was incredible

The culmination of Van Jefferson’s football career took place on February 13, 2022.  The Rams playing the Bengals in the big game at the Rams home stadium.  Jefferson was wrapping up a career year carving out a role on the high powered Rams offense.  By 7pm, the Ram had clinched a world title.  Nothing could be better in Van Jefferson’s world.

Except when his gave birth to their second child less than two hours later.

Van Jefferson’s wife was deep into labor and was wheeled out of SoFi Stadium on a stretcher to be rushed to a local hospital.   Samaria gave birth to their new son shortly thereafter and THEN everything was perfect in Van’s world.

Van Jefferson hustling out of the stadium to get to his wife in labor #SBLVI pic.twitter.com/0GDW0ceWLf

Planning for the big day.

Samaria was technically due on February 17, but everyone knows kids come whenever the hell they feel like it.  The Jefferson family had planned for it, and Van Jefferson’s wife made sure he was well aware that winning a Super Bowl was the priority.  In an article with The Athletic, she said

“I said, ‘You play, I’ll see you at the hospital afterwards’. That’s what it is. I will never take that moment away from him. I want to see him glorify God on the field that day. Just like any other game, I’m going to be there this Sunday and I’m going to stay calm … and pray to God my water doesn’t break. I will be 40 weeks pregnant at the Super Bowl, supporting my husband 100 percent.”

The whole week was a memorable one.  Van and his 5 year old daughter had their first daddy-daughter dance just two nights before he became a Super Bowl winner.  All is good

Van Jefferson’s wife has been in the picture since high school.  They began dating in high school, and had Bella, their oldest daughter, shortly after graduating.  Van headed off to Ole Miss and Florida and the couple eventually broke up.  But shortly before he went to the shield, the two found their way back together.  From Van’s perspective, it was meant to be.