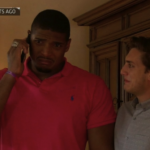 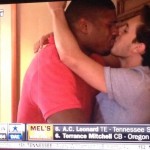 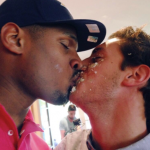 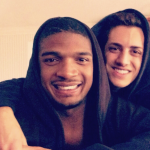 UPDATE 01/09/2014: On a European vacation, Michael Sam’s boyfriend Vita Cammisano became engaged to the currently out of work NFL player.

In an Instagram post from one of Vito’s former teammates on the University of Missouri swim team, the couple was congratulated (and to further support the validity, Michael Sam liked the post as well). No word on who proposed to whom, or any wedding details. We’ll keep an eye out if we find any.

With less than ten picks remaining in the 2014 NFL Draft, it began looking more and more likely that Michael Sam, the first openly gay player in the NFL, would have to enter the league through undrafted free agency. When pick 249 was called, the St. Louis Rams elected to make history and call Sam’s name with their 7th round pick. What better way to celebrate, than fully embracing the person you love, right? And in that moment, Michael Sam’s boyfriend Vito Cammisano had a full on kiss planted on him as so many other wives and girlfriends did during the weekend.

Despite negative reaction from the dregs of society on Twitter, it was a landmark moment. Sam, as he’s done consistently since coming out in February, stood proud as a man and reminded the world of exactly who he is. In that moment, Sam embraced the dialogue that’s taken place throughout the country since his coming out, and effectively put it to bed. There was an air of accepting the narrative that’s surrounded him, while also reminding the world of it’s normalcy in an abnormal situation. “Yes, I’m gay. Like every other football player taken before and after me, I’m going to kiss my partner in celebration. Now let’s play football.”

For his part, Vito Cammisano, a student at Missouri as well, celebrated Mike Sam’s big day.

Wow.What a day. On cloud 9. So proud and happy! #stl #rams #draft @MikeSamFootball…
We are staying home! Could not be more proud of my babe! #stl #rams #missouri

There’s been plenty of pious dialogue saying that the only big deal around a gay player in the NFL is the day when it’s no longer a big deal. That day isn’t today. Today, Michael Sam drove the dialogue. Yes, he’s a gay man, but he’s also a football player. He was the first openly gay football player drafted in NFL history, but without equivocation, he absolutely was not the first gay football player drafted. With Sam breaking that barrier, there’s sure to be more feeling the freedom to come out without fear or shame.

Today was the day to celebrate a gay man kissing his boyfriend on a National Football League broadcast.