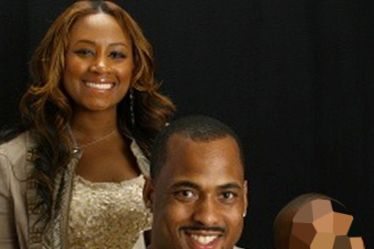 Derrick Johnson’s wife Tamika Johnson was featured in a strange profile by a website called Pro Player Insiders. I don’t really understand what the point of the article was. It focused on the independent design of a special sequined football jersey for her. Yes, you read that right. It was also written by the lady who designed that sequined football jersey, which was somewhat confusing. I thought I was on some sort of fashion website. Let’s be clear why we at Player Wives are here: to talk about the wives and girlfriends of professional athletes. Now, if there so happens to be something peripheral on the side (such as a specially-designed sequined football jersey) then we will briefly mention it, but it’s important that you, dear readers, know what we’re serving up.

Now then, having established that Derrick Johnson’s wife enjoys herself some sequins, let’s talk about what else this lady’s been up to. First off, they’re a fairly conventional sports couple (in a good way). They’ve got one kid who’s going on about six or seven years now, and they do a good deal of community-based events. That doesn’t necessarily mean they’re all charities, but they like to get out there and mix it up. One example that was a charity was a celebrity waiter night that Tamika went to and watched Derrick be a waiter. The couple run a charity called Defend The Dream Foundation, and it exists to help poor kids.

All of this goodness started way back when Tamika moved to Kansas City after he was drafted. Derrick Johnson’s girlfriend was apparently with him for seven years before he popped the question on a beach, according to our pal the sequin jersey designer. They took a vacation to Malibu, and while they were on the beach, he had a waiter deliver a gift basket with some chocolates in it. Instead of chocolates, there was a ring with a big ‘ole shiny rock attached. What a smooth operator. Tamika is sweet like chocolate and strong like a diamond. Well, if that wasn’t the message, then I guess it’s still a good way to think about the proposal, right? 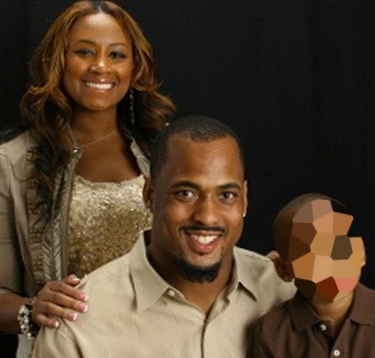