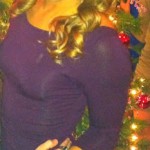 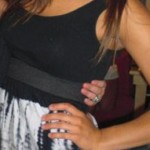 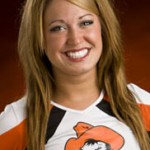 In a scene straight out of the Keanu Reeves movie, The Replacements, the world first met Justin Blackmon’s girlfriend with a sideline kiss. Following Blackmon’s ridiculous 8 reception, 186 yard, 3 TD performance in the 2012 Fiesta Bowl, he jogged to the Oklahoma State cheerleaders to find and embrace his girlfriend, Mariel Dunlap.

Mariel Dunlap is a student at OK State, who originally hails from Edmond, OK or just under an hour away from the Stillwater campus. She is obviously a cheerleader, and was also a member of OSU’s 2010 National Champion Cheerleading spirit squad. According to her bio on the OSU Cheer site, she says the three words that most aptly describe her are, colorful, optimistic and spunky, her biggest influence in life is her mother, and that her favorite quote is: “Be who you are and say what you feel, because those who mind don’t matter and those who matter don’t mind.”

No word if Mariel will be in the green room with Justin at the 2012 NFL draft, but you can imagine she’ll grab some more screen time once Justin goes towards the top. 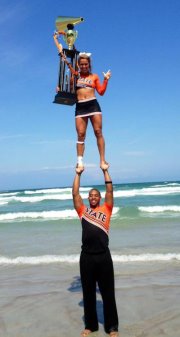