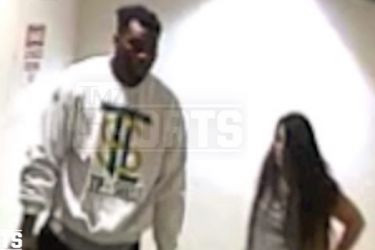 Dante Fowler’s girlfriend and baby mama brawled on February 1st.  But, it took almost a month for the internet to find out all about it.

Guys, the Internet is undefeated.  It always finds out.

The reason it took a while is all because of a tipster to TMZ. Basically what happened is Dante showed up to an apartment building with his girlfriend.  But, then an altercation ensued after a they were confronted by the mother of his child. There appeared to be a short discussion between the three of them, and the women appeared to be fairly tense. Then, Dante sort of stepped away and made a faint hand motion that seemed to prompt them to start fighting. The video that the internet has seen has been edited so that TMZ can show more of it on their television show. Make no mistake: these two women were battling fiercely.

No charges of any kind were filed by anyone, and most importantly from Fowler’s perspective none have been filed by the league. It should also be noted that Fowler has been recovering from a torn ACL injury since last year, though that hardly seems reason enough not to break up the fight. Dante Fowler’s girlfriend and his baby mama did engage in battle, but the big question on everyone’s mind is why did Dante allow it to happen? I don’t really know. He may have thought it was inevitable and that he might as well let them get it out of their system. Is it sexist to say that women shouldn’t be allowed to brawl with each other? I honestly do not know. I will say, however, that the whole thing does feel really, really un-classy. That much seems obvious.

Who are these brawlers?

Now then, the identity of Dante Fowler’s baby mama remain undisclosed. But, it was later revealed that Dante Fowler’s girlfriend is Nicole Holmes.  As for the rest, TMZ holds all of that information.  And, this story kind of showcases their ability to get all the gross gossip information before anyone else. If you’ve listened to interviews with Fowler before this, he doesn’t seem like a bad guy.  But, this doesn’t seem like a good decision.   Most people probably wouldn’t have instigated a vicious battle between two women, but that appears to be what he chose to do. The NFL doesn’t hire these guys based on civility and chivalry ratings, after all.