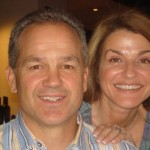 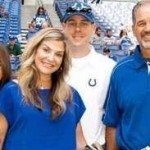 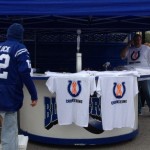 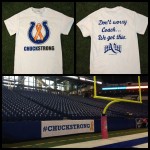 By now, most NFL fans have heard news of the Indianapolis Colts head coach Chuck Pagano being diagnosed with leukemia. However, what many fans across the league may not know is that if it weren’t for Chuck Pagano’s wife Tina Pagano, the diagnosis may have been significantly delayed.

When Colts owner Jim Irsay addressed Pagano’s illness and subsequent time away from the team, he specifically mentioned Tina’s involvement in forcing the head coach to get checked out. Irsay said,

“Coach was feeling some fatigue over the last few weeks, and noticed some bruising on his body that he first thought could have been from contact on the field, or coaching, or playing with his grandkids. Through talking to his wife, Tina, she said, ‘You need to get that checked out, because the bruising appears to be more and more prominent.’ We had the coach get fully evaluated, and the conclusion was that he did have leukemia.

The Colts and entire Indianapolis community have rallied behind the Pagano’s through this difficult journey. Most notably, a “Chuckstrong,” campaign has begun where Livestrong-inspired merchandise is being sold bearing the Chuckstrong motto with all proceeds to be donated to Leukemia research and foundations.

Chuck and Tina Pagano have three daughters, Tara, Taylor and Tori, and two grandchildren, Avery and Addison (daughters to Tina).