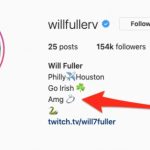 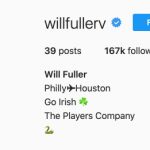 Is Will Fuller’s girlfriend Anna Gilbertson?  She graduated from Notre Dame in 2016. In May of 2016, The Houston Chronicle mentioned Anna in an article about Will. They said if he’s not in uniform, then he spends his free time with her. They also mention that Anna has “professional ties” to the Portland Thorns. The Thorns are professional women’s team in the NWSL. The article mentioned her ties because the Thorns invited her to a preseason camp and listed her as a non-roster invitee. Then, Jamie Goldberg, lead reporter for The Oregonian, posted that Anna was no longer on the roster because she returned to college. She announced that on April 5, 2016.

In the comments that followed, Goldberg said Will Fuller’s girlfriend would probably return to the team. She also said the team liked her and that she remained on their radar. That same year, Anna made the All Acc Academic Team. The official Notre Dame Women’s Soccer Twitter congratulated her and posted her picture. However, on her official biography page, the organization only mentioned her on that team in 2015. They also list her height at 5’8″ and her hometown and high school history. Originally, she grew up in Davis, California. The city is fifteen miles from Sacramento. She also attended Davis Senior High school.

The Notre Dame Observer mentioned Will Fuller’s girlfriend in an article from November, 2015. Since the article states Anna didn’t play much in her first three seasons, she is described as a force in the article. Her coach said she put the team on her back and became a leader. Anna scored only five, four, and four goals in her first three season. In her senior year, she led the team in goals and shots. She totaled 13 goals in her final season. Anna herself commented on her senior year in the article. She said she stepped up her confidence and knew she was good enough to be out on the field.

Anna said playing soccer at Notre Dame was a dream. Since Will also attended Notre Dame, their relationship worked out off the field too. Anna told The Notre Dame Observer she couldn’t express how much playing soccer helped her grow as a person. She said she didn’t have much confidence or belief in herself when she arrived at the school. Since that time, she said she expresses herself more. Anna also speaks fluent Spanish and is half Costa-Rican, according to her official college soccer bio.

Is this relationship still going strong?

Well, honestly, we’re not sure.  Here’s the rub really.  Most of this article was written in 2017, when things were a bit clearer.  At that point, Will Fuller’s girlfriend lived in Houston with him and their dogs. Now?  There’s one clue which may point us in a sad culmination to this story.

In 2017, WIll had the following Instagram bio, including AMG with a ring emoji

Unfortunately, as of the update in 2020, WIll’s Insta has zero reference to AMG at all.

So, while things appear to have hit the skids (at least what’s being revealed publicly), things were good at one time.  And hey, it’s better to have loved and lost than never loved at all, right?