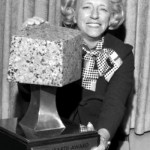 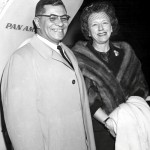 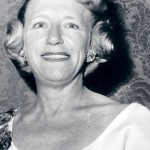 American football legend, Vince Lombardi and wife Marie Lombardi will surely be looking down from the heavens to watch this Sunday’s 2014 Super Bowl. As head coach of the Green Bay Packers during the 1960s, Lombardi led the team to three straight and five total league championships in seven years, including winning the first two Super Bowls ever. Lombardi, arguably the best and most successful coach in NFL history, never lost a season, compiling a regular season winning percentage of 73.8% (96-34-6), and 90% (9-1) in the postseason for an overall record of 105 wins, 35 losses, and 6 ties in the NFL. But before he was donned “The Pope”, Vince met an important key to his success, none other than future wife Marie Planitz.

Apparently, Marie Lombardi served a critical role as an unofficial buffer between her determined and aggressive husband and the players he coached. When players had trouble with the coach, they went to Marie, who would get Lombardi to back off a little. It seems that she was such an essential part of the team’s winning dynamic, that when she skipped out on a game in Texas, Vince became so bad-tempered that the players implored her never to do it again. During his reign in Green Bay, Vince was treated like a king, feared and adored by many in and out of football. But, Marie was known to be able to take Lombardi and give it to the coach like no one else, providing him with a release valve and governing his temper. Vince also didn’t make life easy for his wife and two children by putting football first in his life. He even left his honeymoon early to get back to coaching.

But, Vince didn’t always have it easy with Marie Lombardi either. After losing their first two children, Marie allegedly began drinking heavily. Suffering from chronic depression, multiple reports indicate there were several suicide attempts. As contentious as their relationship could be, it was obvious to anyone that knew them that Vince and Marie always had each others’ backs and truly loved each other. Marie wasn’t even a sports fan, but she learned enough about football so she could speak with Vince about plays and watch footage with him at home. It was special to Lombardi that she was always there, that she was always involved and knew the players and talked with them and knew their wives. 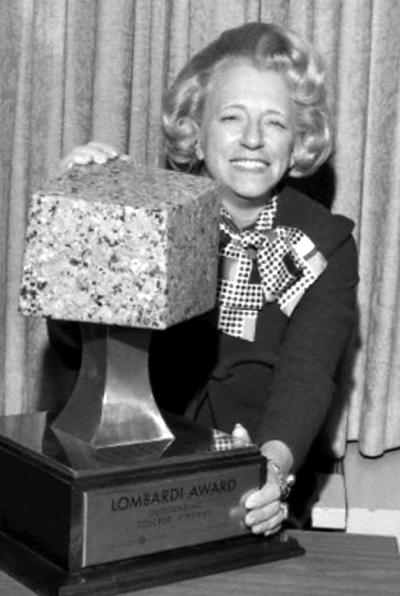