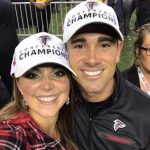 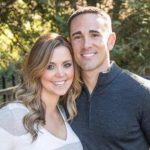 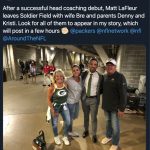 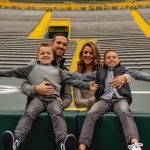 Matt LaFleur’s wife BreAnne LaFleur is getting good at the NFL coaching rodeo.   When Matt hit the pro football coaching circuit in 2009, the family started in Houston.  In the decade that followed, the family had stops in Washington, South Bend, Atlanta, Los Angeles, and Tennessee.  Finally in 2019, the family landed in Green Bay, and based on early returns looks to be setting up shop for a while.  Still all those stops in the pros before your 40th birthday?  Man, that’s a whirlwind.

Hell even before the pro’s, they had three stops on the college ranks.  But the chaos doesn’t stop when you hit the pro’s.  Assistant coaches don’t typically make the big money that coordinators and head coaches do.  Matt LaFleur’s wife Bre was a pharmaceutical rep prior to their time in Houston.  But, because she was loyal and trusted in his future, she gave up the gig to pack up and head to Houston.

It all eventually paid off in the end.

Ultimately, it did all work out.  Matt LaFleur got the Green Bay head coach job, and is deep in the playoffs in just his second year, carrying the team to the 1-seed.  When Matt was introduced as the Packers head coach, he made sure to point out that he’s a family man, appealing to those midwest family values.  Matt LaFleur’s wife was specifically shouted out, with Matt calling her the rockstar of the family.  Moving is a bitch, man.  And giving up your career so your spouse can c hase their career dreams?  Yeah that’s rockstar material.  Hopefully for their sake, the couple is setting down roots in Wisconsin and they don’t need to pack up a moving truck any time soon.

Matt LaFleur’s wife has been in the picturte for quite a while.  The couple has been together through the (at least) nine coaching stops in the last 15 years.  Together they have two sons, Luke and Ty. 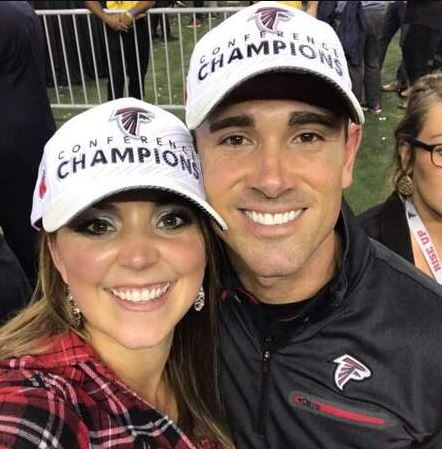