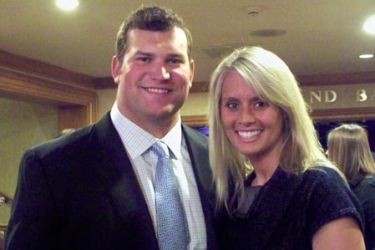 Joe Thomas’ wife Annie Thomas married him back in 2007 after about six months of being engaged. They’re still doing all the same stuff now that they were doing back then. This guy’s still only 30 years old, and they were married when they were both 23. He’s still blocking dudes, and she’s still coaching girls basketball. They were married in the beautiful city of Madison, Wisconsin. I’ve been there, and I love it. There were around 350 guests at the wedding, according to Elegant Wedding Mag. The magazine says his first impression of her was that she was beautiful, and her first impression of him was that he was huge. It lists their favorite thing to do together as “just sitting down on the couch and talking. Both of our schedules are very hectic.”

The couple met at the University of Wisconsin while they were both students. If you’ve never read stories about how athletes meet their girlfriends and wives, then I’ll let you know this is roughly how a third of them end up getting hitched. She came into the football training room to get her ankle taped up, and Joey-boy was there. He invited her to a cookout that he and his roommate were hosting for other athletes. Joe Thomas’ wife Annie Thomas is now the assistant coach at Cleveland State. They’ve also got a young daughter whom they named Logan.

Annie was a color commentator for the Wisconsin girl’s basketball team for about a year at some point. I don’t know exactly how she transitioned into assistant coaching responsibilities at Cleveland State. Neither Annie nor Joe are are too hot for social media, and since Joe has been with the Browns his entire career, Annie probably figured it was a good idea to put down some roots in the coaching community. Joe’s contract is worth about $43 million, by the way, so they don’t have to worry about finances any time soon. 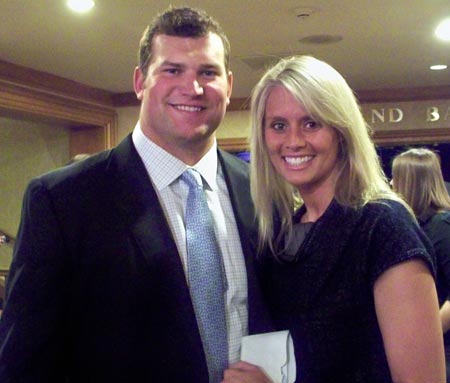