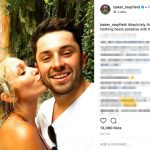 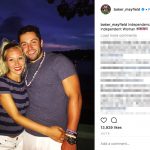 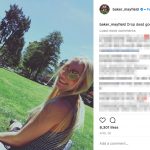 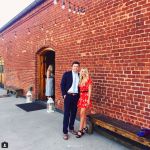 Baker Mayfield’s girlfriend is a popular topic.  And, when you’re the number one overall pick with the burden of saving a Cleveland franchise, there’s plenty of attention on you.  Let’s take a trip through what we know, newest first.

Baker moved on quickly here, because Emily Wilkinson was a new name to us.  In fact, the first time we’d heard of Emily, it was when we learned that the couple was engaged.  She went from girlfriend to fiancee to Baker Mayfield’s wife in no time flat.  These two married shortly after in 2019.

Shortly after the draft, Baker dropped to one knee and put a ring on it.  But, it’s tough to blame him.  Emily used to work as a plastic surgery coordinator, but gave up that career to move to Cleveland with Baker.  Suppose it comes in handy that she also doubles as an Instagram model, with followers into the six figures.  She often posts photo shoots with legit photogs out there.  And of course…. we’ve all seen the At Home Wife Baker commercials where Emily definitely shines.

Now, Morgan came into the picture just a few months after his split from Baillie.  Morgan comes from Tulsa, Oklahoma and attends the University of Oklahoma. Since Baker is the quarterback of the Sooners, Morgan attends all the home games. The site The Sports Daily posted about them on May 26, 2017. They mentioned the trip the couple took to St. Lucia at the time.

Later in the year, on June 26, the Baker Mayfield’s girlfriend attended his cousin’s wedding with him. Baker said he felt lucky to attend the wedding with Morgan. On June 12, he said she never left his side through all his ups, downs, flaws, and mistakes. Baker told her that her love never faded and that she is his inspiration and motivation. On April 15, Baker thanked Morgan for making his birthday “the best one yet”. He also told her that her kind heart means everything to him. He himself wished her a happy birthday on March 16.

That particular tribute post was long and included Baker Mayfield’s girlfriend posing with him at the beach. He told her she was his best friend and said it was a blessing to be around her every day. They also celebrated New Year’s together in 2017 in New Orleans. According to Baker, there was a restricted curfew so their photograph was a false midnight photo. During Christmas, Baker talked about how he ventured home to spend Christmas with his family, but he said he missed Morgan during that time. Earlier in December, Morgan attended the Heisman award ceremony with Baker. Baker didn’t win, but he said he felt confident he had “the best trophy of the night” when he posed with Morgan for a photo.

Baker Mayfield’s ex-girlfriend attended ​Oklahoma’s arch-rival Oklahoma State, and the two are very well aware of it.   Was that the impetus for their split in 2016?   But how could this one fail?   Baillie and Baker.  Alliteration for the win!  Baillie comes from Austin, Texas originally, and she used to dabble in beauty pageants. She was also a soccer player at Oklahoma State but is now finished with school.

But good lord, Baillie is a social creature. It seems there’s never a need for her to take a selfie because she’s always having one of her friends take pictures with her hanging out with even more friends. She’s very young and is in full-on friends-forever mode with all of her college buddies.  Baillie has an enormously bubbly personality, and she sees the humor in most things. She had been working in sports media and is now doing segments where she interviews athletes for KCBD News Channel 11 in Oklahoma. 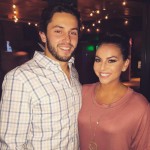 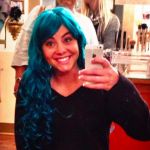 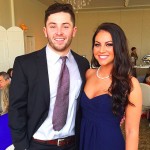 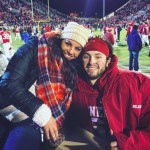