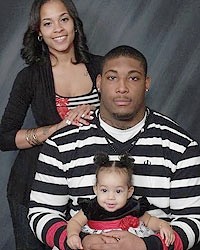 UPDATE 11/26/2014: Devon Smith’s girlfriend Channing Smythe is the mother to Leah Still, the brave little girl who has captured the nation’s attention and prayer during her inspiring and brave battle with cancer. And while Devon and Channing have moved on from one another, they are forever attached due to Leah.

According to a report in the New York Daily News, Devon Still has not paid child support for Leah since August, 2014. And while Devon is a few months in arrears in paying child support, Channing isn’t alleging much beyond the fact that Devon owes some dough, telling the Daily News:

“I don’t consider him a deadbeat dad. I know he loves and cares for his daughter and he is there for her. I just need him to help me financially.

Smythe has hired uber-attorney Gloria Allred for help in this process. Allred has already contacted the NFL looking to determine if his failure to pay child support is a violation of the league’s personal conduct policy.

Let’s hope this is nothing more than an accounting error causing the four months of missed payments, and everyone can get back to focusing on what’s important. Keeping Leah Still in our thoughts and prayers.

After battling his way through an injury plagued start to his career missing both the 2007 and bulk of the 2008 seasons due to injury. And no one can forget the 2011-2012 season for Penn State which overshadowed the end of Still’s career in Happy Valley.

Fortunately for Still, he’s finally found motivation and focus to keep him from being distracted. Devon Still and his longtime girlfriend Channing Smythe became parents to a girl in April, 2010. Lehsari who goes by Leah, provides Still the inspiration to excel and walk on stage with the commissioner next week and he says as much in an interview with the Sun Gazette:

“That [Leah] was my main motivation, my biggest motivation just to know that I’m playing for her livelihood. I wasn’t going to let nobody go out there and stop me from being able to provide for my daughter.”

Still also acknowledges that none of his success happens without his girlfriend Channing Smythe helping to take care of Leah at home and during the season, home meant at a small off campus apartment. There’s not much else known about Channing, though we fully expect to see her in the green room with Still next Thursday night. By then, we hope to have some pictures to share with you. 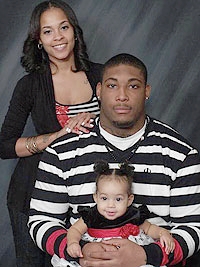